Vinny Perth has strongly criticised comments made by Jason McAteer, who questioned if new Republic of Ireland boss Stephen Kenny has the pedigree for the job.

Speaking at OTB Sport's UEFA Champions League final preview night, McAteer recalled the arrival of Brian Kerr as the senior boss in 2003. Kerr had excelled with Ireland underage sides and was rewarded for that work with the top job after Mick McCarthy's first tenure ended.

"Brian Kerr, you know, he came in and I must stand up and say that I actually wondered what he was doing and how he got the job," said McAteer.

"I was just a bit bewildered by the appointment in all honesty.

"When I think of Stephen's appointment then, it is a pretty big ask from a guy who has only really managed League of Ireland teams and a team in Scotland.

"I think the step up is massive, and I'm always worried about the pedigree of a manager stepping into an international role.

"I don't think Brian's playing career was basking in glory and I think sometimes players might have questioned whether he knew what it takes to manage a team of elite sportsmen, elite players.

"I found his training when I went in, and I'm sure this will make headlines, but I found his training very basic. I thought the way he went about managing the squad was quite basic and I was a little bit bewildered about some of the things he wanted to do."

"There's no doubt the old brigade, the old players, there's a little bit of bitterness towards now people coming through."

Perth was sacked by Dundalk on Wednesday night. He spent almost eight years with the Lilywhites and, before taking the manager's role, served as Kenny's assistant during an incredible period for the club which saw them dominate domestically and make outstanding progress in Europe.

Those exploits ultimately earned Kenny the Ireland post, and Perth - who could barely conceal his frustration over McAteer's remarks - said there's "an old brigade" who resent seeing new faces making their mark.

"I was shocked by them comments," he told Joanne Cantwell on RTÉ Radio 1's Saturday Sport.

"And then part of me isn't shocked, because there's no doubt the old brigade, the old players, there's a little bit of bitterness towards new people coming through.

"The comments were shocking and they were disrespectful. There is an audience for those comments, that's the problem. Irish football has come a huge way but we still continue, and a lot of people who support it continue to make the same mistakes.

"They look to the UK, the old pros on these panels and in studios talking about the game, but it's moved on and it's changed.

"I remember maybe four years ago myself and Stephen spent a week in Spain on a training camp. We were there with a Swedish club called Ostersund. Graham Potter, who's now the Brighton manager, was at that club - a pretty average Swedish club, but he was so forward thinking, like Stephen and he done a similar job to Stephen.

"He ended up getting the Swansea job and [last season] he kept Brighton in probably the greatest league n the world. 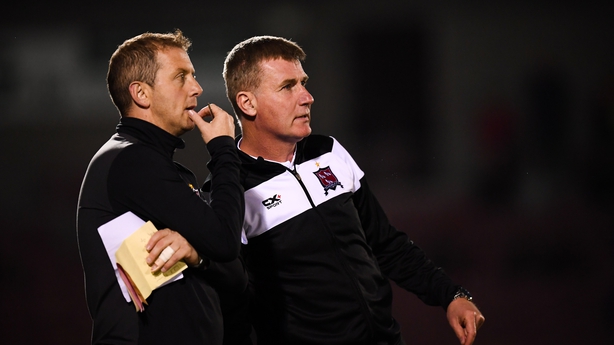 "That's because people at Brighton are forward thinking. The game has changed. These people talk about the old Jack Charlton days, and do their after-dinner speaking and do the circuit, make money out of it, but it's so disrespectful.

"We've got to learn from the GAA. I know it's not played on a global level, but if Brian Cody or Jim Gavin were given the international job to run GAA, no one would ever question it. Stephen Kenny is exactly what Ireland needs now. He is the perfect manager for that job.

"McAteer even made reference to, 'I know this is going to make the headlines'... that's why it's done. It's to stay relative, to stay on these panels, but it's so disrespectful to Irish football.

"We need to learn from it ourselves, look at ourselves and understand that our coaches and managers belong at this level. What Stephen has achieved means he is rightly in the position he is in. He deserves it. I couldn't be any stronger than that without a few expletives."