SSE Airtricity League First Division leaders Cabinteely suffered their first defeat of the season with a 3-0 loss at home to UCD.

The visitors took the lead through Colm Whelan's seventh-minute goal and Cabinteely’s task was made more difficult with the sending off of Kevin Knight with an hour to play.

Yoyo Mahdy doubled the Students’ lead five minutes after the break and the Ireland underage international wrapped up the points with his second in added time, his fourth goal in four days for College. 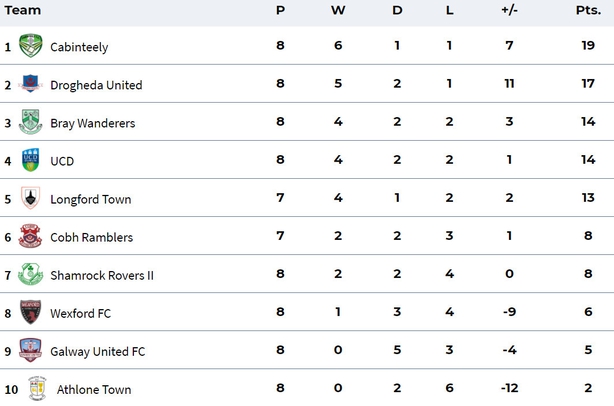 Drogheda United took advantage of the league leaders slip up as they also won 3-0 on the road at Wexford.

A quick-fire double from Mark Doyle after the restart paved the way and Hugh Douglas added a late third to reduce the gap at the top to just two points.

Shamrock Rovers II also recorded a comfortable win on the road, departing the Athlone Town Stadium with all three points thanks to a 4-0 victory.

Brandon Kavanagh scored a brace either side of a Max Murphy goal, while Michael Leddy added a fourth against bottom of the table Athlone.

Galway United, who today appointed John Caulfield as manager, drew 0-0 at home to Bray Wanderers, who had Dylan Barnett dismissed late on.