The pressure on Vinny Perth proved too much as Dundalk's season sank lower with their midweek European exit. A trip to Sligo would not be the fixture they'd choose with a caretaker manager in charge, knowing the Bit O' Red have made an impressive return to action.

It's been a long week for the Lilywhites, so expect some changes to the side that lost to Celje,

Sligo Rovers: John Mahon, Johnny Dunleavy and Garry Buckley are ruled out with injury. Will Seymore will have a late fitness test because of a hamstring problem. Kyle Callan-McFadden returns from injury.

Dundalk: Andy Boyle and Cameron Dummigan remain sidelined while Greg Sloggett is a doubt after picking up an injury in training ahead of the Celje game during the week.

Liam Buckley (Sligo Rovers manager): "This is one of the hardest games you'll get in an ultra competitive division. I’m sure Dundalk are hurting from Wednesday and obviously now there is a change of manager. They’ve a fantastic squad so it doesn’t change a lot for us, it’s going to be a massive challenge. They’ll be looking to prove a point I’m sure. To be honest we’re focused on what we can do in the game.

"We’re only going to give ourselves a chance if produce our best. We passed and moved the ball better on Tuesday and we’ll look to do that again. It’s almost the halfway point so it would be good to get a result and tee ourselves up for the rest of the season."

John Gill (Dundalk caretaker manager): "We're devastated for Vinny, but the club has to go on. It has gone on before when people have left so we just need to focus on Sligo now and make sure we get a result.

"We have a long trip after an arduous European tie but the lads are in good spirits, we trained well and we'll go over there with confidence.

"Despite the result, I thought we were back to ourselves against Celje on Wednesday night. If we go about ourselves the same way we did on Wednesday then we know we are capable of getting a result. We just need to cut out some of the individual errors." 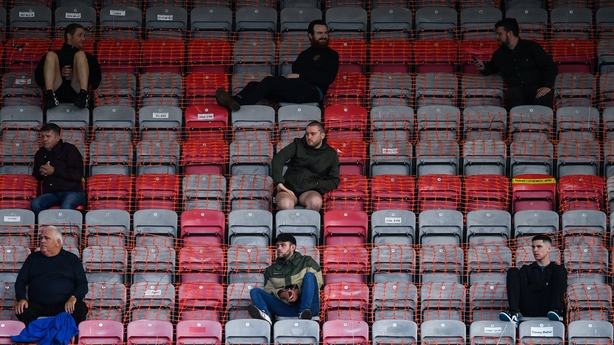 The rise of Bohemians shows no sign of slowing down as they continued talk of an unlikely title challenge by grounding out a 1-0 win over Finn Harps last week.

European football awaits in five days in Hungary, and this is another important game to ensure it returns next season.

St Patrick's Athletic showed a mettle that some feel they have been lacking when holding Shamrock Rovers last week.

They'll be keen to take advantage of their fellow top four side becoming distracted by Europe.

Bohemians: The hosts are missing Cristian Magerusan (knee), while Paddy Kirk and Ross Tierney are both out with ankle problems.

St Patrick's Athletic: Stephen O'Donnell has a fully fit squad to select from, however he will be without the services of Shane Griffin who serves a one-match suspension following his red card last week against the Hoops.

Keith Long (Bohemians manager): "St Pat's have quality within their squad with a good mix of experience and talented young players so we hope we can continue to make progress in every single game by challenging ourselves to reach a level of performance and hopefully picking up points."

Stephen O'Donnell (St Patrick's Athletic manager): "It's another Dublin derby and it's another game you want to be involved in as a player. Bohemians will be delighted with their form post the Covid break. They will be very happy with where they are at the minute, and they are in a rich vein of form right now.

"We have to be ready for what will be a very tough encounter, but it's one we have prepared well for and it's one we are looking forward to."