Dundalk manager Vinny Perth took the blame for his side's disappointing 3-0 Champions League exit at the hands of NK Celje in Hungary but insisted his side shouldn’t be written off just yet.

After a disappointing run of form domestically which has seen them fall eight points adrift of Shamrock Rovers in the SSE Airtricity League, defensive errors proved costly at the Ferenc Szusza Stadion in Újpest as goals from Luka Kerin, Dario Vizinger and Filip Dangubić saw the Slovenian champions claim a historic first victory at this level, having claimed their maiden domestic title last month.

Dundalk’s recent malaise has seen many question whether their period of dominance is coming to an end but Perth believes they will come good sooner rather than later.

"I do believe in that group of players and I believe that at the very minimum they can get back in and qualify for Europe again," said Perth.

"They still have a European campaign. It’s not over. They must learn from that but they will. I don’t fear for that group in that sense.

"We’ve got good players at Dundalk and an amazing squad with amazing people but they just need to be backed at the moment and I think they’ll be great again."

A Dundalk defensive mix-up allows Luka Kerin to get in around the back, and despite being on the ground, manages to flick the ball past Gary Rogers to give Celje the lead just before half-time #rtesoccer https://t.co/LWBhOJgavr pic.twitter.com/myjensyVqb

Asked about his future, the 44-year-old said: "It’s a fair question.

"That has caused us problems with Covid-19 but there’s no doubt that that falls at my door and, ultimately, I’m big and ugly enough to accept it but what will be, will be.

"I’ll see what our owners felt about tonight and we’ll go from there but I’m very relaxed about it.

"It certainly wasn’t a 3-0 defeat. I think if Pat (Hoban) scores we’d go on and win the game but that’s football. The football Gods aren’t shining on the town of Dundalk at the moment but I thought the players were immense.

"I can look in the mirror and say I’ve done everything and left everything on the pitch myself personally. I can’t do much more with that group than what I’ve done and ultimately that’s where it is." 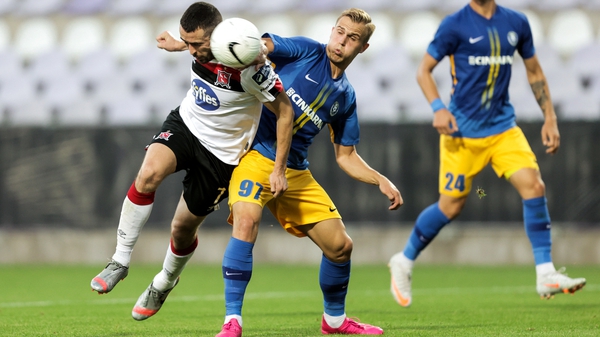