Dundalk have represented the League of Ireland's best hope of making a big impression in Europe over the last few years, but they are in uncharted territory this week. Everybody is.

The Covid-19 pandemic has changed the world and everything in it. All the things we used to know are out the window; a lot of the old certainties obsolete.

The Lilywhites were drawn to face NK Celje of Slovenia away in the first round of Champions League qualifying, but since Slovenia is not on the Irish 'green list' [the countries Irish citizens can travel to without having to restrict their movements for 14 days upon return] the game has to take place in a neutral venue - in this case Ujpest in Hungary.

Dundalk will receive a travel grant from UEFA to help cover the funds required to charter a plane, but the cost of hiring the venue is split between both clubs.

It's a tough test for the reigning Premier Division champions, who are taking nothing for granted.

However, the uncertain nature of the times we live in means they have had to already start planning for a potential second-round clash with either Molde [Norway] or KuPs [Finland] on Tuesday 25 August. That match would definitely be played at Oriel Park.

The logistical challenges have been unique and difficult.

Speaking to RTÉ Sport's Tony O'Donoghue, Dundalk general manager Martin Connolly laid out how just how the club has been preparing for this crunch tie.

"The draw was last Sunday [in Nyon] and it became apparent we were working off the green list, like everybody else, for travelling," he said.

"Then it was obvious that because we were drawn away in Slovenia that there was going to be a problem. We had a double check with UEFA because there were some questions about going to Slovenia and quarantining when we got back, which was one proposal.

"After checking with UEFA, it was obvious we couldn't do that, and that it had to go to a neutral venue. The obvious neutral venue - for the Slovenians as well - was Hungary. It was all done within 24 hours.

"There's always challenges in Europe, especially if we're playing at home. In Oriel Park we're faced with huge challenges but this year is slightly different because of medical and public health issues.

"There's also the fact that it's in a neutral country. As they were the home team it's up to them to host it so they're doing a lot of that, which is helpful for us. The challenges are the [Covid-19] testing, meeting the protocols that UEFA have applied.

"We'd normally go two days before the game, but there's no point this time."

"We've always gone on charter flights so it's no different for us.

"The problem is you're not taking supporters or members of the media, which we'd always try to do as well.

"We'd normally go two days before the game, but there's no point this time because you have to stay within the bubble, which is your hotel. We're flying out the day before the game and we'll be restricted to the hotel before it."

So there'll be less time to prep ahead of the game in the Szusza Ferenc Stadium, with players cooped up in their hotel and no travelling Lilywhite army behind them.

Still, it's not all bad. There may be no away fans present but there'll be no passionate home crowd to contend with either - and if Dundalk can get through this they know home comforts await in the second.

UEFA have ruled that Oriel Park is up to speed in terms of having the appropriate protocols in place but, as has happened before, if Vinny Perth's men progress to the later rounds of qualification they will have to move to either Tallaght Stadium or the Aviva.

"There's no supporters, all the advantages are sort of removed, so we're very hopeful we can get a result and have a European game in Dundalk next week," added Connolly.

"The protocols we'll face will be good, just to see how it all works. I don't have to tell everyone the problems within Oriel Park.

"They're added to by Covid but removed by the fact we have no spectators in. Due to UEFA protocols, everywhere will be zoned. It all has to be controlled. That's easy to do in a modern stadium; not so easy in somewhere like Oriel Park. 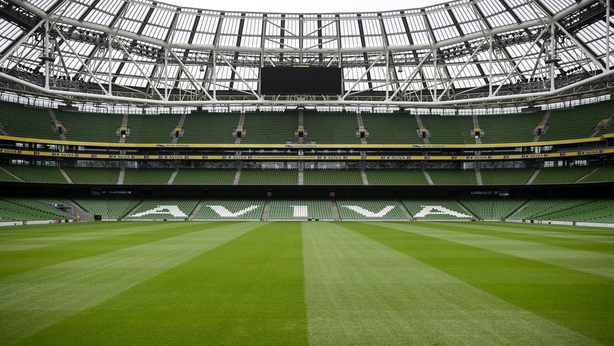 "We had to apply to UEFA and submit an operational plan. Once UEFA was happy with our operational plan there was no problem. They've accepted how we're going to work it, but we had looked at the Aviva in case it wasn't acceptable.

"The available options [for later rounds] are Tallaght or the Aviva. The Aviva is appealing because there won't be as much operational costs. You'd be behind closed doors."

The Slovenian league's start was suspended for 10 days after three clubs from the league returned positive Covid-19 tests. That meant the two games that Celje were due to play before their showdown with Dundalk in Hungary were called off.

How badly this hampers them remains to be seen. Right now, any assumptions could be made to look foolish in a strange, post-pandemic world.

Watch live coverage of the Dundalk v NK Celje in the Champions League first-round qualifier on RTÉ 2 and the RTÉ Player this Wednesday from 5.45pm. Live blog on RTÉ.ie and RTÉ News Now.