Cabinteely increased their lead at the top of the SSE Airtricity League First Division table to five points thanks to an impressive 3-1 victory over Longford Town.

O'Neill grabbed his first senior goal for the league leaders in the 19th minute with a sweet strike from 15 yards out, and former Shamrock Rovers attacker Waters doubled the lead ten minutes before half-time with a well-placed finish from inside the box.

Longford were second in the table coming into the tie and looked to get back in the game in the second half, coming close to reducing the defecit when Joe Manley hit the woodwork in the 67th minute.

But the points were secured 20 minutes from time when Kevin Knight converted a penalty after Waters was taken down inside the box by Longford keeper Lee Steacy.

The home side grabbed a consolation in the 76th minute as Joe Gorman got his name on the scoresheet, but it was the Dublin side who took the points.

Alan Murphy's side were unfortunate to leave United Park empty handed. Twice they hit the frame of the goal with efforts from Shane Duggan and Maurice Nugent. But Chris Lyons penalty was the difference between the sides. #GUFC pic.twitter.com/s64QACiTDW

Drogheda United maintained their form to stay in touch with the leaders thanks to a 1-0 win over Galway United.

Chris Lyons' 12th-minute penalty was enough to decide this United Park encounter as the home side moved into second place in the table. 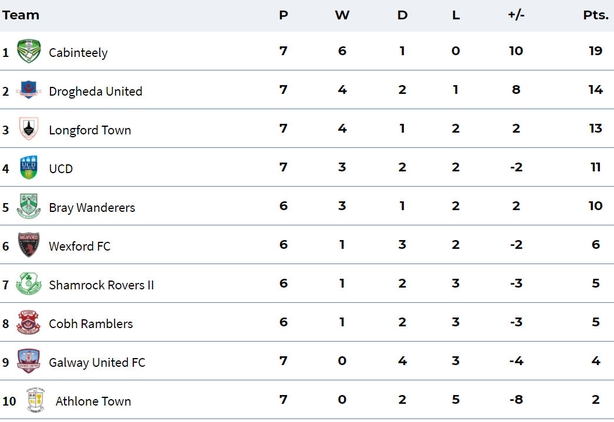 Nine-man UCD moved up to fourth place in the table thanks to a come from behind 2-1 victory over Athlone Town.

Lee Duffy opened the scoring for the visitors at the UCD Bowl, before Yoyo Mahdy's 45th-minute penalty levelled matters going into the second half.

And it was Mahdy who was on hand in the 72nd minute to grab all three points for the Students, who had Michael Gallagher and Jack Keaney sent off during the game.

Athlone finished with ten men after Ciaran Grogan was sent off for a second bookable offence late in the game.