Bayern Munich outlined why they are the team to beat in this season's Champions League with a stunning 8-2 quarter-final demolition of Barcelona in Lisbon.

The German champions blitzed Barca with four goals in the opening 31 minutes, adding four more in the second, to set up a semi-final with Manchester City or Lyon and they are the hot favourites to win the tournament for a sixth time.

It was a mesmerising performance, helped by a defensive horror show from the Spanish side, as a brace from Thomas Muller was complemented by goals from Ivan Perisic and Serge Gnabry put them 4-1 up at the break.

Josh Kimmich, Robert Lewandowski and a brace from Barca loanee Philippe Coutinho inflicted a heaviest ever European defeat on the Catalans as Hansi Flick's side ran riot.

Barca boss Quique Setien will surely pay the price for this embarrassment, coming after a limp end to their league campaign, as his side are condemned to a fifth year without a Champions League title. 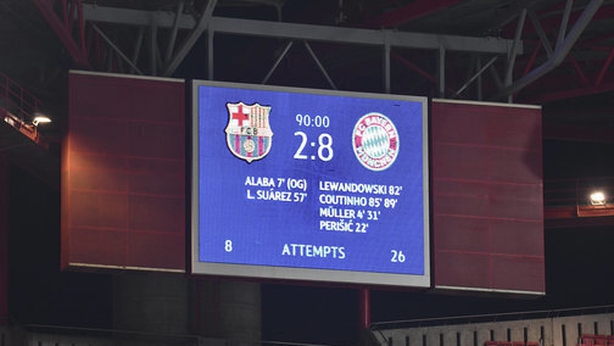 They had levelled at 1-1 through David Alaba's own goal and then Luis Suarez got one back just before the hour, but there was to be no comeback.

The writing was on the wall in just the fourth minute as Muller grabbed his first of the evening.

Rakitic ran clear down the left, pulled it back to Muller, who played a one-two with Lewandowski and arrowed a low shot into the bottom corner from 12 yards out.

Barcelona, albeit briefly, had hope that the evening might turn out differently as they were level just three minutes later.

Jordi Alba was played in and his cross, meant for Suarez, was intercepted by David Alaba, but the defender's sliced clearance evaded Manuel Neuer and looped into the top corner.

Suarez then had a great chance to put the Spaniards in front but Neuer came out well to save and from the second phase of resulting corner Lionel Messi's cross was missed by everyone and crashed into a post.
But Barca's attacking threat could not compensate for the shambles at the other end and Bayern blitzed them with three goals in 10 minutes to kill the tie.

Perisic put the Germans back in front in the 21st minute with a drilled effort that took a clip off Clement Lenglet after Roberto was caught in possession before Gnabry scored a picture-book goal to make it 3-1.

The former Arsenal man span off Lenglet and was played in by a brilliant ball around the corner by Leon Goretzka and made no mistake with an emphatic finish.

Then four minutes later Muller got his second and it was too easy as he darted to the near post and turned home Kimmich's cross.

Barca, whose suicidal playing out from the back had cost them, were shell-shocked, but it could have been even worse, but Lewandowski missed two good opportunities, while Perisic fired over.

There was no respite in the second half as Bayern continued to attack at will, but Barca survived and got themselves back into it just before the hour mark as Suarez superbly finished from Alba's pass to make it 4-2.

But their hope was short-lived as a relentless Bayern got a fifth and it was down to a sensational piece of play from Davies.

The precocious left-back made a fool of Nelson Semedo and sauntered into the box before teeing up Kimmich for an easy tap-in. 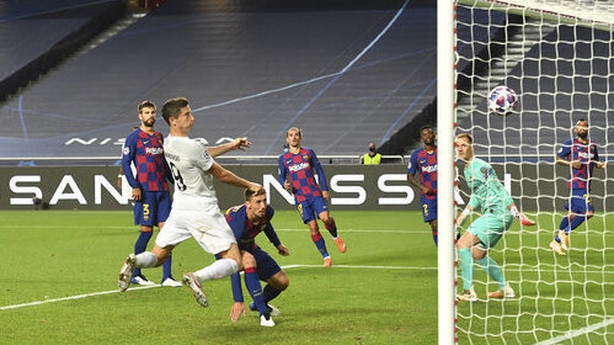 Bayern beat Tottenham 7-2 in the group stage but they went one better as Lewandowski finally got on the scoresheet in the final 10 minutes with his 54th goal of the season - a close-range header.

Coutinho, on loan from the Spanish side, was almost apologetic as he fired two goals from close range in the final few minutes on a memorable night in the Estadio da Luz.