Unlikely hero Eric Maxim Choupo-Moting insisted he was not ready to go home after coming off the bench to fire Paris St Germain into the Champions League semi-finals in dramatic style.

The former Stoke striker broke Atalanta hearts as the Ligue 1 outfit struck twice at the end to secure a 2-1 win over Atalanta in the competition's first one-off quarter-final at the Estadio da Luz in Lisbon.

Choupo-Moting told BT Sport: "It was all in all a crazy game, a tough game, a tough opponent and think we showed such a good morale until the last second.

"We believed in ourselves. It wasn’t easy because we had some good occasions. They played a great game, an unbelievable game, but we had some occasions and unfortunately didn’t score.

"When I came on, I thought to myself, 'We can’t lose, we can’t go home like that’. I was confident in myself, confident in the team and then the rest is a little history of Paris."

PSG looked to be heading out of a competition in which they have fallen short so often in the recent past, as the game reached its 90th minute with Atalanta leading through Mario Pasalic’s first-half strike. 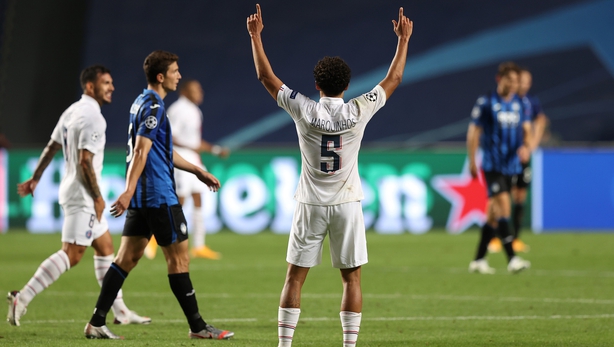 But where star man Neymar had previously misfired as a series of earlier chances went begging, defender Marquinhos stabbed home a late equaliser to pave the way for Choupo-Moting to snatch victory in the third minute of added time.

The win set up a last four showdown with either RB Leipzig or Atletico Madrid and kept alive their hopes of winning the title for the first time.

Choupo-Moting said: "It seems like a long time that we (have) never won the Champions League. With such a team, you have to have this ambition. It’s such a big club.

"We will give everything in the next game and continue to believe. Football has its stories.

"We have won already four titles this season, but the most important is this one. We really believe in ourselves and we did it today.

"Everybody knows we have individual top quality, but we wanted to show it also as a team and it is a big step today against a very good opponent.

"Respect to Atalanta and I’m very happy that we did it today."

Atalanta’s adventure could hardly have come to a more heartbreaking conclusion, but midfielder Marten de Roon admitted he and his team-mates will soon be able to look back on the campaign with pride.

He told www.uefa.com: "At this moment, it’s quite painful. Tomorrow, I will be proud of our team and club, but at this moment, I feel disappointment.

"We played a good first half where we made if difficult for Paris, we put them under some pressure and had some minor chances.

"In the second half, we sat a little deeper. You have to defend with 11 men and we did it so well until this unfortunate moment in the last minute."

Watch Barcelona v Bayern Munich in the quarter-final of the Champions League this Friday on RTÉ2 and the RTÉ Player from 7.30pm.