Alfredo Morelos reaffirmed his commitment to the Rangers cause as he fired his first Scottish Premiership goals of 2020 in a 3-0 win over St Mirren at Ibrox.

Boss Steven Gerrard admitted the Lille target has had his "head turned" by interest from France following Gers' Europa League defeat to Bayer Leverkusen on Thursday.

The striker was way off his best in Germany, continuing a slump that began with his Old Firm red card back in December.

But he looked more like his old self against the Buddies, firing in the cross which lured Conor McCarthy into a first-half own goal before adding a double after the break as he ended a drought which had seen him net just once in his previous 13 games.

Lille are reported to have failed with a fresh €18 million bid just last week and while he could yet still be heading for the Ibrox exit, Gerrard – whose team now have two wins from two – will want him to retain these levels while he remains part of his squad.

Roofe was not involved, however, with the former Leeds and Anderlecht forward still short on fitness after eight months out injured, while Itten got only a late cameo.

But there was more than enough firepower in Rangers' existing armoury to keep the Buddies busy. 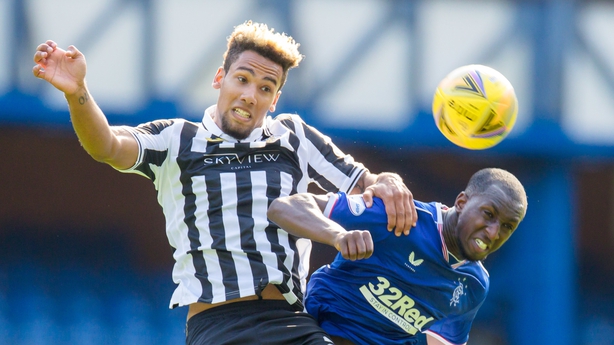 It took Rangers just five minutes to test former Light Blues back-up goalkeeper Jak Alnwick and from there it was one-way traffic against a defence happy to set up camp in their own box.

Ianis Hagi scuffed his effort while Morelos had two goes at beating his old team-mate in the Saints goal without success.

Jon McLaughlin – making his Gers debut at the opposite end in place of the injured Allan McGregor – was a first-half spectator, with Saints’ best moment of the opening period not even reaching the box as Leon Balogun halted Ilkay Durmas’ breakaway surge with a perfectly-timed tackle.

But Rangers got the breakthrough their dominance merited in the 23rd minute.

Saints failed to clear Borna Barisic’s corner but got legs in the way of shots from James Tavernier and Ryan Jack.

However, they switched off as Glen Kamara fed the ball to Morelos, whose low cross was diverted into the net by McCarthy’s leg.

The blue waves continued to crash down on St Mirren. Kent fired wide from distance, while Alnwick pulled off two good saves to deny Tavernier – the second when the Gers skipper controlled a loose clearance before letting fly with a fierce volley from 25 yards.

Saints almost grabbed an unlikely leveller moments after the restart as McLaughlin misjudged Durmas’ cross but Barisic got a vital block on Jamie McGrath’s follow-up shot.

But they were soon pinned back again. Morelos let out a scream of frustration as the Saints number one again defied him, this time with a fine low save down to his right.

Kamara fired wide, but just as Rangers’ tempo began to drop, they gave themselves some breathing space after 69 minutes as Morelos headed home from Tavernier’s corner for the goal he had been longing for.

Having netted for the first time since February’s Scottish Cup win at Hamilton, it then took the Colombian just five minutes to add his second as he tapped home from Barisic’s deflected cross.