Waterford FC and Cork City shared the spoils in this afternoon's Munster derby at the Regional Sports Centre, with both sides hopping a spot up the SSE Airtricity League table thanks to the draw.

The Blues had endured a somewhat chaotic week, with training temporarily ceasing as two players received Covid tests while club doctor Sinead Fitzpatrick resigned, and the two sides couldn't be separated having initially struggled to find their rhythm.

John Sheridan made one change from the team who defeated Shelbourne in Dublin last weekend, with Michael O'Connor replacing match-winner John Martin, while former Blues Cory Galvin and Rob Slevin were drafted in for the Leesiders alongside Daire O'Connor.

Partly due to the absence of fans, the first half of this derby would make NPHET consider loosening the restrictions on outdoor gatherings.

Without vocal backing from the stands, John Sheridan's men watched on as the Cork back-three enjoyed periods of sterile possession in their own third during the opening 20 minutes without ever causing Brian Murphy's heartbeat to accelerate. 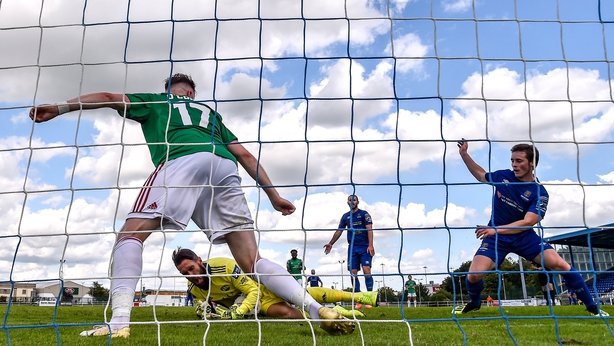 Kevin O'Connor curled a tame free-kick wide midway through the half before Galvin finally injected some unpredictability into the play. The diminutive winger carved out some space down the left wing before drilling a low ball across the goal, but no teammate was on hand to to steer it goalwards.

This seemed the spur the home side into action. A Kurtis Byrne ball ran too long for Matty Smith and the latter had the best chance of the half as it drew to a close.

Tunmise Sobowale progressed into the attacking third and found Ali Coote but the wide-man's low cross was blazed over by the Scot.

Contrary to the the dull opening forty-five, the second half started at an electric pace. The impressive Sobowale delivered a delicious cross which the onrushing Michael O'Connor could only flick over the crossbar and a similar chance was blocked in the Cork box minutes later, with Byrne claiming a handball prevented his side from taking the lead.

At the other end, Galvin and Dylan McGlade were receiving the ball in pockets of space behind the Waterford midfield and the substitute bounced a right-footed shot from distance off the crossbar, with his rebounded effort too high to give his side the lead.

Both sides continued to create chances in the final half hour with Galvin shooting over and straight at Brian Murphy, while Michael O'Connor and Sam Bone couldn't find the net after two set-pieces - the centre-back nodding Tyreke Wilson's corner straight at McNulty.

The Blues pushed for a winner and almost claimed the three points in injury time when Wilson and Smith combined, but the Cork net-minder smothered the ball at the feet of Will Fitzgerald.