The striker equalised with a penalty he had won himself to cancel out Christian Pulisic's early opener.

Chelsea then lost Cesar Azpilicueta and Pulisic to injury before Aubameyang brilliantly added his second to secure a 2-1 victory and then lifted a record 14th FA Cup for the Gunners.

Chelsea then had Mateo Kovacic sent off as they chased the game, the Croatia international picking up two bookings, both for fouls on Granit Xhaka with the second a controversial call from referee Anthony Taylor.

Aubameyang's future at Arsenal remains in doubt as he has less than a year to run on his contract, but after downing Manchester City with two goals in the semi-final, he again showed his importance to Mikel Arteta's side.

For Arteta, this was a first piece of silverware in a managerial career that only began in December and sees Arsenal qualify for the Europa League next season.

Aubameyang wasted the first chance of the final, heading wide when picked out in the box by Ainsley Maitland-Niles.

Chelsea had their own opening moments later, Xhaka robbed of the ball and Mason Mount's curling effort forcing Emiliano Martinez into an early save.

But there was nothing the Arsenal goalkeeper could do from the next Chelsea attack as Pulisic struck.
Mount broke into the penalty area and squared to Olivier Giroud, the former Arsenal man flicking the ball into the path of Pulisic, who skipped past the challenge of Kieran Tierney to become the first United States international to score in an FA Cup final.

Nicolas Pepe thought he had curled in a marvellous equaliser but his celebrations were cut short as Aubameyang had strayed offside in the build-up. 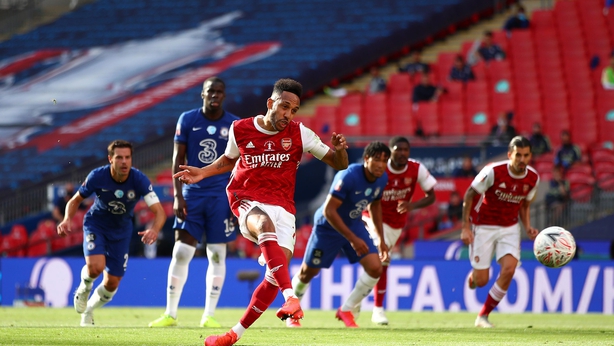 However, just seconds later and Aubameyang was played in over the top, racing clear of Azpilicueta before being hauled back by the Chelsea skipper.

Taylor opted to only caution Azpilicueta but the penalty stood following a short VAR check and Aubameyang made no mistake from the spot.

Azpilicueta would last less than five minutes longer, forced off with an injury as he made way for Andreas Christensen.

Arsenal dominated the remainder of the first half without managing to test Willy Caballero in the Chelsea goal.
After the break, Pulisic broke forward looking to add his second of the afternoon but instead was soon going the same way as his captain, limping off with a hamstring injury after shooting wide.

Pedro entered the fray in his place as Chelsea started to wrestle back control of the contest.

That was until Aubameyang struck once again.

Hector Bellerin burst forward down the right and Christensen's heavy challenge saw the ball break to Pepe, his pass picked up by Aubameyang who turned on to his preferred left foot to lift the ball over Caballero.

Chelsea's task was made all the more difficult as Mateo Kovacic was sent off, shown his second yellow card for a foul on Granit Xhaka just six minutes after they had lost their lead.

While Arteta could toast his first trophy, Chelsea boss Frank Lampard ultimately saw his side come up short.
He threw on Ross Barkley, Tammy Abraham and Callum Hudson-Odoi despite being a man light but there was to be no comeback.

Chelsea had beaten Arsenal 4-1 in the Europa League final last season but this would go the other way, due in no small part to the clinical Aubameyang, whose future Arteta will want sorted as soon as possible. 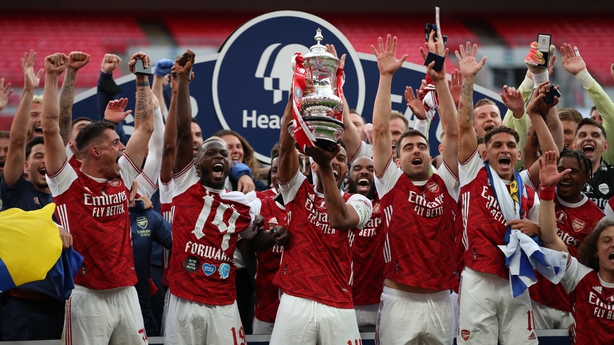