The win maintained the Hoop's perfect start to the season and put them five points clear of Dundalk at the top of the SSE Airtricity League table.

Just as important as the three points though, was the news earlier in the day that Rovers’ top-scorer Graham Burke had extended his loan from Preston North End until the summer of 2021.

While he didn’t start the game, he may yet be crucial as Stephen Bradley’s side chase a first league title since 2011.

Rovers dominated proceedings from the start, beginning the game with the same possession-based style they demonstrated earlier in the season.

The first chance came after just two minutes when Roberto Lopes headed a Jack Byrne corner over the bar.

However, five minutes later the Hoops were in front.

Leo Donnellan gave away a needless free-kick just outside the box and it was a moment of class from Jack Byrne, who curled the resulting effort into the top left corner.

As he so often is, Byrne was again crucial as Rovers doubled their lead in the 15th minute.

Collecting the ball from a sloppy Finn Harps pass, Byrne slipped Dylan Watts through one-on-one with Mark McGinley. McGinley did his best to rush out but Watts showed composure to ensure it reached the back of the net.

When Aaron McEneff put the hosts three up it looked like Harps were in for a hammering. pic.twitter.com/kw6G7rKAjs

Byrne put Watts through again on 24 minutes but his chipped effort was hooked clear on the line by former Rovers man David Webster.

Aaron McEneff finally made it three for the league-leaders on 37 minutes, when he rifled a shot from outside the box past McGinley.

Just as things looked like they may get very ugly for Horgan’s side, Harps got one back. A long-throw into the box was flicked on to the back post allowing Karl O’Sullivan to volley it in for his second for the season.

Horgan must have had stern words for his side at half-time as Harps came out for the restart with a renewed urgency in the press, effectively suppressing Rovers’ efforts to hold on to the ball.

Crucially, Harps neutralised the threat of Byrne in the second half after Ruairi Harkin was introduced to man-mark the Irish international until his substitution in the 67th minute.

Rovers lacked fluidity in the second half without their talisman, while the away side sought to shift the ball right to goal-scorer Karl O’Sullivan. 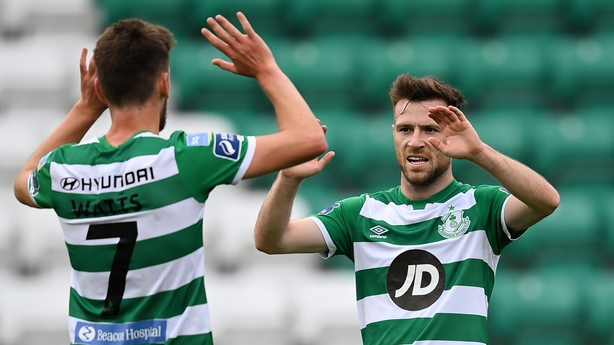 Breaking into the box, however, proved difficult outside of Tony McNamee’s long-throw set pieces.

Substitute Graham Burke’s low driven free-kick in the 86th minute was one of few Rovers chances in a drab second-half to contrast the exhilaration of the first. Bradley's side looking happy to settle for the three points rather than push forward.

Next up for Rovers is a trip to Derry on Sunday, while Harps will be hoping for valuable points when Shelbourne visit Ballybofey on Tuesday evening.