Cabinteely picked up where the left off in the First Division with a 2-0 win at Galway United that stretched their lead at the top of the table to five points.

Pat Devlin's men went to Eamonn Deacy Park with three wins out of three, and they continued that streak with a hardfought success on Friday night.

Kevin Knight broke the deadlock on 29 minutes when he nodded home from close range.

The points were sealed 14 minutes from time after Shane Barnes pounced on a deflected ball and drilled home a low finish.

Wexford FC picked up their first win of the campaign as they saw off rock-bottom Athlone Town 3-1.

Jack Doherty put Wexford one up from the penalty spot in the 19th minute but the hosts hit back through Ronan Manning just 60 seconds later.

However Kaleem Simon punished poor Athlone defending in the 57th minute after he'd gambled on a long ball that caused panic, and Simon put the lid on it 15 minutes from the end with a terrific bending strike.

Elsewhere UCD and Longford Town played out a goalless draw in Belfield, while Bray Wanderers and Cobh Ramblers also couldn't be separated at the Carlisle Grounds, where it finished nil-all.

Shamrock Rovers II host Drogheda United in the final game of the weekend on Sunday. 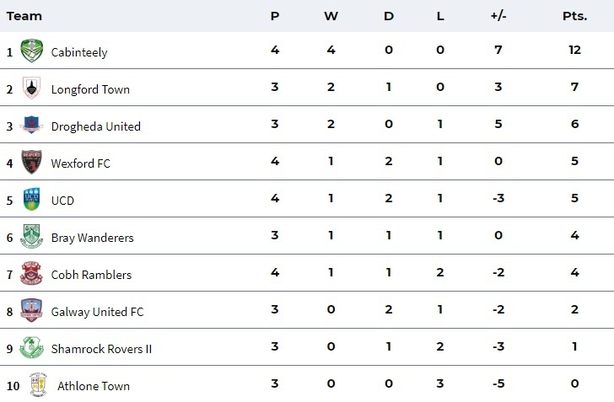