Neil Lennon will sit down with his Celtic players on Saturday and outline the magnitude of the season ahead.

The Scottish champions set out on their quest for an unprecedented 10th successive Premiership title at home to Hamilton on Sunday.

In his pre-match media conference the Northern Irishman revealed he had "not really" touched on the prospect of a historic achievement but will do so before the visit of Accies.

The former Celtic captain, who revealed winger Mikey Johnston will have surgery on a calf complaint which will keep him out for four to six weeks, said: "There has been a lot of other things going on and now we have to get back to work on what is expected of us and what is at the end of it, if we can accomplish what we want.

"While it is going into a historic season we can't get away from the day-to-day work, the values and standards the players have set over the last few years.

"We will have a team meeting tomorrow night just to remind them.

"There has been a lot of distractions going around - the pandemic, us not playing football while the English, Italian, German leagues are going - and they have been away from competitive football for a while.

"We have been softly, softly with them in pre-season, now we will whip them mentally and try to get them into shape and focused on what lies ahead." 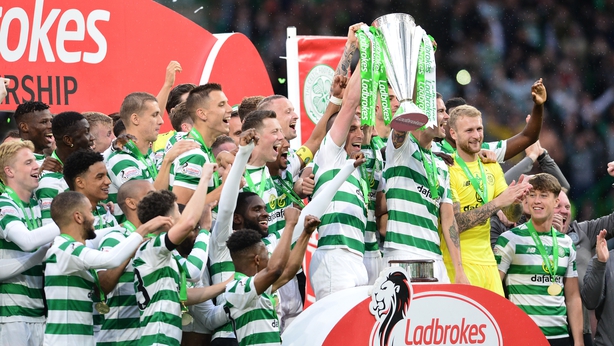 However, the former Hibernian boss, in his second spell as manager at Parkhead, believes there will be less intensity than in previous seasons when Celtic were aiming for nine in a row for a second time.

He said:  "I don't think the pressure is as intense as maybe it was when winning seven, eight and nine.

"When I was at Hibs you could hear the Celtic fans singing about going for the 10, in the seventh year and when I came back it was really intense, and last season, getting the nine.

"So they have already equalled that record and now they can only beat it.

"It is up to the rest to stop us rather than we put ourselves under massive pressure. We have to take it as another season, another title to win."

Lennon confirmed that new signing Vasilis Barkas will be his number one goalkeeper and will go straight into the Celtic squad for Sunday, although lack of fitness means Scott Bain may play.

The 26-year-old, who has been capped 10 times by Greece, joined the Scottish champions on a four-year deal from AEK Athens on Thursday for a reported fee of between #4.5million and #5million.

Lennon said: "Scott understands what his role at the club is.

"He may start on Saturday if we feel that Vasilis isn't up to speed yet. He has only trained one day with us.

"We have no hesitation putting Scott in, he's a very good goalkeeper.

"But with Craig Gordon going as well (as Fraser Forster), we felt we needed a keeper in and we have done that."