Brazil winger Willian has shaken off an ankle complaint to be fit for Saturday's cup showpiece contest at Wembley against the Gunners.

The 31-year-old signed a short-term contract extension to cover a season elongated by the coronavirus shutdown, but that expires after Chelsea's Champions League exploits.

Arsenal are understood to be one of the clubs monitoring Willian's situation, while Chelsea have previously offered the long-serving Stamford Bridge star new two-year contract terms.

Willian had been holding out for a three-year deal and could yet leave the Blues - but Lampard is convinced that the 70-cap Brazil star will be focused solely on steering Chelsea to FA Cup glory on Saturday.

Asked if he is sure that Willian will give everything to the Chelsea cause this weekend, Lampard said: "Yes, because I've known Willian for many years now as a player and now as his coach.

"And if anyone wants to see the mentality of him, it's been shown since restart.

"So I would expect nothing less than he's shown already, and that's Willian for you."

Kante has missed six matches after picking up his latest hamstring injury in the 3-0 win over Watford on 4 July, but his return will bolster the Blues' midfield ranks.

The luckless Ruben Loftus-Cheek will miss out however, having picked up an unspecified minor injury in training on Thursday.

Lampard's main selection conundrum could revolve around whether to keep faith with veteran Willy Caballero in goal, or recall the out-of-sorts Kepa Arrizabalaga.

Kepa joined Chelsea in a goalkeeper-record £71 million deal in 2018, but a string of erratic performances could see the Blues aim to loan him out this summer ahead of an eventual permanent move.

Caballero has been Lampard's cup goalkeeper but also replaced Kepa for the crucial 2-0 victory over Wolves last weekend that sealed Chelsea's fourth-place Premier League finish and Champions League qualification for next term.

"N'Golo Kante and Willian are in the squad, so we'll see if they are fit to be in the starting XI," said Lampard.
"Ruben Loftus-Cheek has a small problem he picked up yesterday, so he's out of the game.

"Selection will be difficult, because we have competition in the squad. And as you've seen through the season at times I've had to change it, I've felt the need to change it.

"And I always do it with the idea that can we win a game, can we be as strong as we can be, with considerations of what opposition are in front of us?

"And in big games like this it becomes slightly more difficult because I know how much players want to be involved in these games.

"Because in the last period for us, people on the bench have made a huge differences in certain games.

"We have to feel like we're all together, and if we win it, it means a collective thing for us. 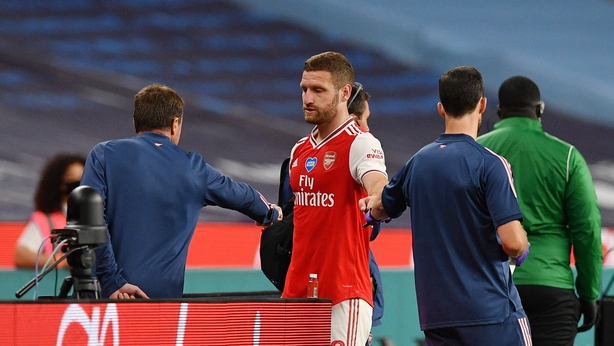 Meanwhile, Arsenal have no fresh injury concerns but will be without defender Shkodran Mustafi, who underwent surgery on a hamstring issue suffered in the semi-final win over Manchester City.

Cedric Soares is cup-tied and misses out as do Pablo Mari (ankle), Gabriel Martinelli and Calum Chambers (both knee) - goalkeeper Bernd Leno is fit following his own knee injury but head coach Mikel Arteta has said Emiliano Martinez will start.