Brentford reignited their bid to reach the Premier League with victory over Swansea to reach the play-off final on an aggregate score of 3-2.

The Bees overturned Swansea's one-goal lead from the first leg within the first 15 minutes through goals from Ollie Watkins and Emiliano Marcondes.

Bryan Mbeumo added the third just after half-time and, despite Rhian Brewster pulling one back, the Bees, who last week blew their chance of going up automatically, took a big step towards redemption.

Seven straight wins after lockdown had left promotion tantalisingly within Brentford's grasp, before successive defeats by Stoke and Barnsley consigned them to the play-offs.

That mini implosion set up one, final, dramatic match at Griffin Park, their home for 116 years, before next season's move to a new 17,250-capacity ground.

They were able to bid farewell in style and a memorable victory means the Brentford Community Stadium could still be hosting top-flight football in September, with the Bees attempting to become the 50th different team to play in the Premier League.

Thomas Frank's side will now head to Wembley on Tuesday for a £170million showdown with Cardiff or, more likely, their west London neighbours Fulham.

Swansea, who had finished 11 points behind the Bees having gatecrashed the play-offs with an unlikely six-goal swing on the final day, saw their first-leg advantage wiped out after 11 minutes.

The Danish midfielder came up with one of the passes of the season, inch-perfect through the backpedalling Swansea defence where Watkins was racing towards goal, the striker nervelessly firing past Mulder into the corner. 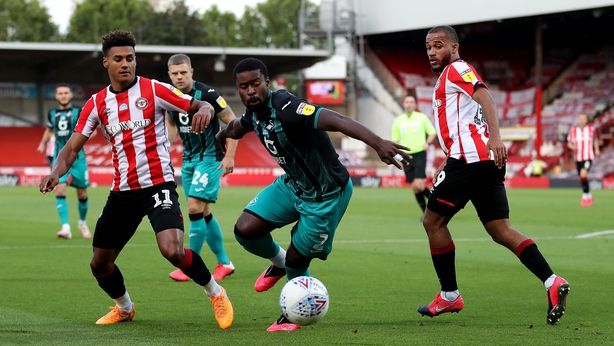 Four minutes later Brentford had their second and the tie had been turned on its head.

Once again Jensen started the move, finding Said Benrahma who lifted the ball on to the head of Marcondes to guide home.

Raya made a fine save to deny Conor Gallagher as Swansea attempted to hit straight back, but seconds later Brentford almost had a third with Benrahma striking the foot of the near post.

Suddenly the Bees were looking like the side who were sweeping all-comers aside post-lockdown, with their 'BMW' strikeforce Benrahma, Mbeumo and Watkins back at full throttle.

They grabbed a third a minute into the second half when Rico Henry, whose red card in the first leg was overturned on appeal, crossed for Mbeumo to volley home.

Swansea halved the deficit when a mistake by Pontus Jansson allowed Brewster to lob Raya with 12 minutes left, but this time Brentford did not choke.

Swansea could not find another to force extra time, and instead it was Brentford who almost added a fourth when Benrahma clipped the crossbar.

Griffin Park, with its terracing at one end and a pub on every corner, would have been absolutely bouncing had fans been present.

Those absent supporters will have to content themselves with the fact that when they are allowed back, it will be in a shiny new stadium and, maybe, they will be watching their team in the top division for the first time since 1947.