Watford's five-year stay in the Premier League ended as they were relegated following a final-day defeat at Arsenal.

The Hornets knew their fate was out of their hands heading into the game at the Emirates Stadium and, despite rallying after slipping three goals behind, they ultimately fell to a 3-2 loss.

Pierre-Emerick Aubameyang hit a first-half brace either side of Kieran Tierney's first Arsenal goal - but Mikel Arteta's side will have to be better than this showing if they are to beat Chelsea in the FA Cup final next week.

Troy Deeney's penalty reduced the arrears before the break and former Arsenal man Danny Welbeck pulled another back - but, with Aston Villa drawing at West Ham and Bournemouth beating Everton - Watford finished 19th.

The afternoon could not have started worse for Watford, who conceded a penalty in the opening minute.
Craig Dawson floored Alexandre Lacazette and, after a lengthy VAR review which also contained an offside check, Aubameyang tucked home the resulting spot-kick.

To be fair to Watford, they responded well and came close to an equaliser just before the 15-minute mark.
Ismaila Sarr cut inside from the right and fed Abdoulaye Doucoure, his shot blocked by Rob Holding into the path of Roberto Pereyra, who then drew a smart save out of Emiliano Martinez.

Deeney then headed straight at Holding as the visitors enjoyed a level of success when pushing forward.

But it was at the other end where their top-flight status was unravelling, Tierney's shot deflecting off Will Hughes to wrong-foot Ben Foster and double Arsenal's lead before the drinks break. 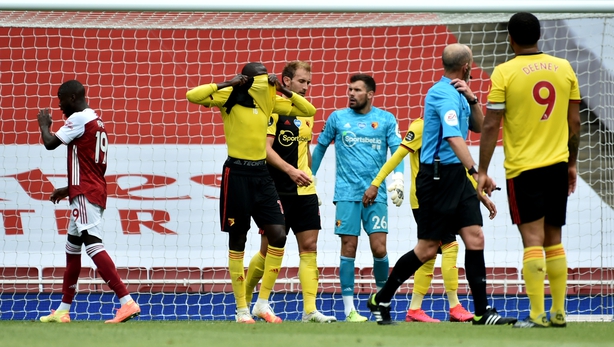 The third goal looked to have firmly finished off this game as a contest and Watford's top-flight stay, a throw-in into the visitors' box allowed to bounce unchallenged before Aubameyang controlled and turned home a fine overhead kick.

But captain and talisman Deeney at least gave Watford hope of a shock comeback, thrashing home a trademark penalty after David Luiz had tripped Welbeck.

There was certainly still some residual hope as Adam Masina fired just over, with Welbeck drawing a fine close-range save out of Martinez.

He would not have a chance soon after though when Welbeck was on hand to steer home Sarr's low cross and bring Watford to within a goal of Arsenal's seemingly-unassailable lead.

The same duo combined minutes later but this time Martinez brilliantly denied Welbeck a second from a clever flick.

With Watford taking more risks, they were exposing themselves at the back and needed Foster to be at his best to prevent Aubameyang completing his hat-trick from Eddie Nketiah's pass.

Watford maintained their threat but could not force an equaliser, which still would not have been enough given Villa's draw across London at West Ham as Arsenal ultimately finished eighth.