Neil Lennon admitted his Celtic side were given the most difficult test possible in their 4-0 friendly defeat by Paris Saint-Germain at the Parc des Princes.

Striker Kylian Mbappe had the home side ahead inside the first minute with a drive and in the 25th minute, Brazilian superstar Neymar added a second for the classy French champions.

PSG made wholesale changes for the second half and two of their substitutes Marco Verratti and Ander Herrera combined after three minutes of the restart for the latter to fire in a third before Pablo Sarabia volleyed in a fourth as the home side dominated the second half.

For Celtic, their French defender Christopher Jullien hit the post with a header on 38 minutes, before second-half substitute James Forrest had a couple of efforts late in the game.

Hoops boss Lennon, whose side begin their quest for a 10th successive Ladbrokes Premiership title win at home to Hamilton on 2 August, took positives from the match.

He told Celtic TV: "We were playing against a world-class side.

"We didn't get off to the best of starts but I thought after that, for about 30-35 minutes, we were a match and we played some really good football.

"I'm so disappointed we didn't get a goal because I thought our play deserved one.

"But that's as stiff an examination as you're going to get.

"In terms of a working exercise on the physical side of the game, the mental side and the concentration side of it, that's as good as it gets. I'm really pleased with a lot of aspects of the game." 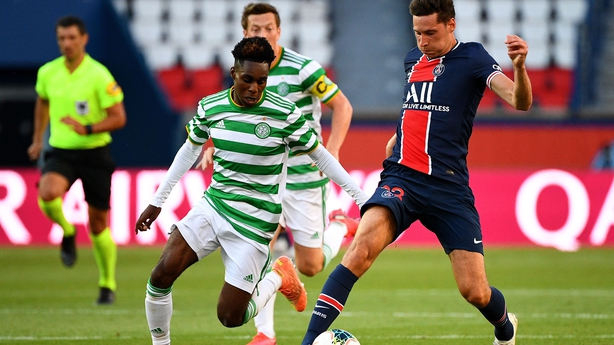 Celtic went into the game following a 2-1 defeat to Lyon and a 1-1 draw with Nice in the Veolia Trophy tournament but PSG were a step up in quality.

However, Lennon believes his players will benefit from going toe-to-toe with a star-studded side.

"It was really tough for the players and then PSG changed their full team at half-time. I think some of our players needed the game," said  Lennon who stressed that skipper Scott Brown was rested as a precautionary measure.

"The players have only really had one full game going into this one, so I think they'll benefit from it.

"It's a been a terrific quality of teams that we've played over the last four or five days and I think that'll stand us in good stead going forward."