Given how last season ended, Leeds United fans might have been forgiven for thinking that they would have needed something from the final day of this campaign's Championship season to go up.

But with two games to spare, they ended an often tumultuous 16-year wait for a return to the promised land of the Premier League.

Marcelo Bielsa's side also do that as champions after the win over Derby County at the weekend confirmed that no side will usurp their place at the top of the division.

But there is plenty to play for below Leeds on today's final day of the coronavirus-affected season.

With Leeds having secured the first automatic promotion place, attention turns to the battle for second position, currently occupied by West Brom.

Despite Republic of Ireland Under-21 defender Dara O'Shea's recent contribution to the goals department, the Baggies have stuttered in the last three matches with two draws and a defeat seeing them slip into Leeds' rearview mirrors and almost into the clutches of the chasing Brentford and Fulham.

But thanks to Brentford's untimely defeat to Stoke off the back of an excellent run, West Brom know a home win over Queens Park Rangers will definitely secure second place and automatic promotion.

A West Brom slip-up would open the door for both Brentford and - in the case of a Baggies defeat given the goal difference factor -  even Fulham, with the two chasers facing Barnsley (H) and Wigan (A) respectively today.

Brentford have the best goal difference in the Championship, so even if they only draw against Barnsley, the Bees would go up if West Brom were to lose. However, a Fulham win in that exact scenario would see the Cottagers improbably leapfrog both clubs above them and into second place.

In terms of Irish interest, the aforementioned O'Shea is a promising player, while Callum Robinson is also on loan at West Brom until the end of the season.

Over at Fulham, two Irish internationals currently ply their trade at Craven Cottage in the shape of Harry Arter (on loan from Bournemouth) and Cyrus Christie.

And Brentford have former Ireland Under-21 cap and one-club man Kevin O'Connor on their staff as assistant first-team coach.

Depending on what happens in the games involving West Brom, Brentford and Fulham, there will be a knock-on effect on the play-off picture.

Of teams below the top six, only Swansea City can mathematically get into the play-offs. They have to beat Reading away and hope Cardiff City lose to Hull City at home.

A defeat for Forest, who host Stoke, coupled with a huge goal difference swing in favour of Swansea, along with a Cardiff draw or win, would see the former European Cup winners slip out of the top six with the Welsh clubs taking advantage.

For the moment, Forest have a goal difference advantage of five over Swansea, knowing that a point will be enough to keep their hopes of following Leeds' achievement of ending a long Premier League absence alive.

If there are no changes of position after today's action, Cardiff would face Brentford in the play-off semi-finals and it would be Nottingham Forest against Fulham.

When it comes to Irish representation, Galway native and Ireland senior cap Greg Cunningham is on Cardiff's books, although he has not made any appearances for the club this season due to injury and also spent the first part of the season on loan at Blackburn Rovers. 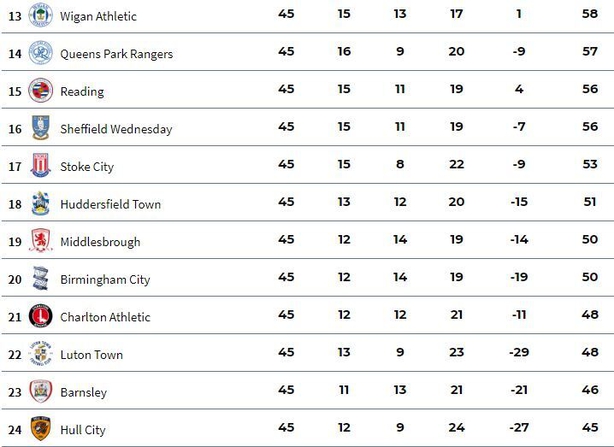 Further down in the lower reaches of the Championship, points deductions could impact the final placings regardless of how today's fixtures pan out.

As things stand heading into today's matches, no team has yet been automatically relegated which leaves for a fascinating evening.

Wigan, who are 10 points clear of the relegation zone, will have a 12-point deduction for entering administration applied after the Fulham game which makes a victory for the Latics imperative if they are to survive - an appeal notwithstanding.

A loss to Fulham coupled with the sanction would definitely relegate the club pending appeal, but a victory would mathematically keep Wigan out of the bottom three depending on the results of the four current lowest placed teams.

Sheffield Wednesday will also be nervously awaiting a decision on their own fate. The Owls are currently eight points above the relegation zone (10 with Wigan's deduction), but await an English Football League verdict on a misconduct charge over the sale of Hillsborough Stadium with a points deduction possible.

Depending on the scale of the potential points sanction if applied - ranging anywhere from nine or 12 to a maximum of 21 points - coupled with an adverse final day result at home to Middlesbrough, who are not yet safe themselves, Wednesday could be dragged into the bottom three.

Even Derby County, five points higher up the table than Wednesday, could end up being affected depending on the outcome of their own disciplinary case.

Points deduction possibilities aside, every team below Stoke could go down mathematically on paper, although Huddersfield's goal difference advantage is sizable and a point at Millwall would definitely ensure survival.

Meanwhile, if Middlesbrough and Birmingham City beat Sheffield Wednesday (A) and Derby County (H) respectively, the two clubs at the centre of separate cases, then safety is assured on the pitch.

Barnsley must beat Brentford to avoid the drop without the reprieve of off-field considerations and similarly Hull City cannot afford anything but victory at Cardiff.

The margin for error for Luton, who are in the bottom three at present, and Charlton is not as stark as for the two sides below them but in the latter's case, victory would ensure safety.

What's clear is the final day will be dramatic with even more intrigue potentially at play off the field. 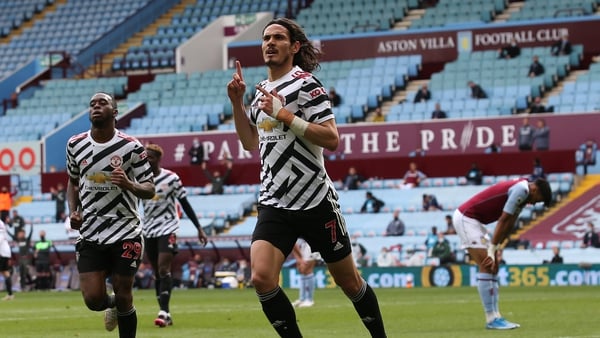