McGoldrick, 32, scored twice - his first ever goal in the Premier League - to sink Frank Lampard's third-placed Blues and keep alive the Blades' hopes of finishing inside the European places.

They've leapfrogged Wolves into sixth place, four points behind Manchester United, to give their Europa League hopes another big boost.

McGoldrick was terrific all afternoon, and afterwards admitted the feat of scoring his long-awaited first goals in the English top flight was still sinking in.

"It means the world," he told Sky Sports.

"I made my debut when I was 16 and still in school. Everyone's dream is to play in the Premier League, and I’ve made that dream this season. My second dream was to score.

"Two years ago I got released from Ipswich Town, I didn’t know where I was going to be. I got a trial at Sheffield United, then won promotion and Player of the Year, and now here I am, living my dream."

McGoldrick said his barren run had not perturbed him, adding: "I had told the lads 'don't worry when it comes I will get a brace'.

"Thirty-five games in and the league table doesn't lie. That was us at our best today."

Players, Gaffer, staff and fans have all backed me. Getting my name sung after missing chances, this is a reward for them."

Blades manager Chris Wilder, who admitted his side had "been close to our max" in the victory, tried to pour cold water on suggestions they could challenge for a top-four finish.

"We're just after another performance from the players. They look like they're enjoying their football."

United are on course to finish in the top-flight's top six for the first time since 1975, but Wilder made it clear his players would keep their focus.

"We will never get carried away," he added. "That can be very dangerous. We are enjoying all this. My players have been outstanding .

"I will let others talk about Europe. If I hear any of my players saying it they get a rollicking.  Here we are staying grounded." 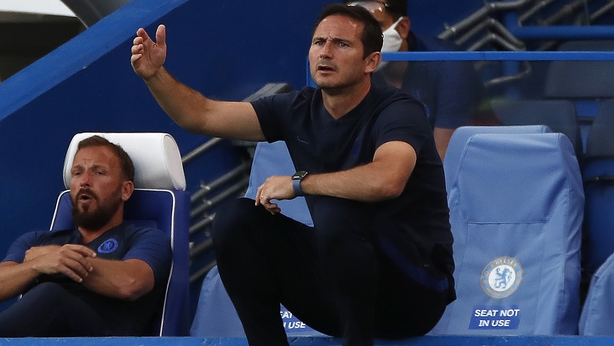 Meanwhile a dejected Lampard said his Chelsea players had no time "to cry their eyes out" after their chastening defeat.

The Blues could fall out of the top four on Monday if both Leicester and Manchester United win their game in hand.

"You tend to learn more from tough moments and tough games," Lampard said. "The most important thing is that collectively it is not (time) to cry our eyes out."

Lampard's side had won five of their six previous Premier League matches, but were roundly beaten on their first visit to Bramall Lane in nearly 14 years.

"They were also stronger than us. With no crowd you can hear every voice. All I could hear were Sheffield United voices.

"You know if you come here below par collectively, as we did, then something like this is going to happen.

"We have to put this to bed and keep fighting to finish in the top four. We are still in that race because what we have done this season.

"I learned a lot today - I learned a lot that I won't forget. We might be outside the top four when we play again, but it's not about that right now - I'm more concerned about this performance.

"I know we can't approach our games against Norwich, Manchester United, Liverpool or Wolves in the same vein."