Champions Liverpool failed to win at home for the first time in the Premier League since January 2019 after they were held to a 1-1 draw by Burnley.

Jay Rodriguez equalised for Burnley in the 69th minute after Andy Robertson had given Liverpool a first-half lead.

Liverpool now have 93 points with three games remaining as they hunt down Manchester City's record total of 100 points from two years ago. Burnley are ninth on 50 points.

Keeper Nick Pope kept Liverpool at bay with a series of good saves, including a brilliant reaction to keep out a powerful close-range effort from Mohamed Salah in the 18th minute. 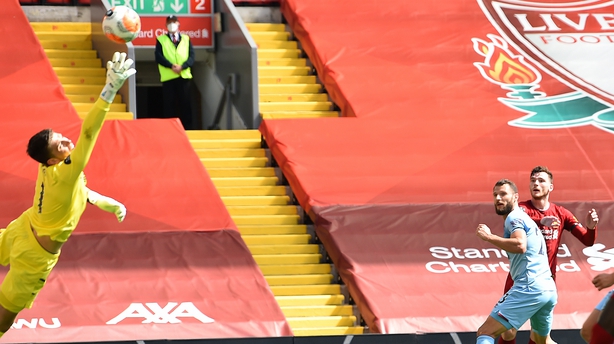 But Liverpool's domination finally came to fruition in the 34th minute when Fabinho floated in a cross from the left and Andy Robertson met it with a perfectly angled header into the top corner.

Pope was outstanding again to keep out a Sadio Mane drive with the Burnley keeper largely responsible for the Clarets heading in at the break only a goal down.

Liverpool's Roberto Firmino should have had his first league goal at Anfield this season but scuffed his shot against the post in the 49th minute.

But Burnley drew level with a well-struck finish from Rodriguez after James Tarkowski had headed down a deeply hit free-kick.