Serbia hitman Mitrovic marked his return from a three-match ban with a bullet spot-kick at Craven Cottage as Fulham sealed a fourth straight league win.

Josh Onomah later fired his third goal of the season to rubber-stamp a crucial victory for Scott Parker's men.

The Whites leapfrogged Brentford into third place, temporarily at least, with the Bees travelling Derby on Saturday.

Fulham's latest win will keep the pressure on the league's top two Leeds and West Brom, but boss Parker will surely be delighted to have secured a play-off place.

Mitrovic edged back to the top of the league's scoring charts with his 24th goal of the campaign, inching ahead of Brentford's Ollie Watkins again.

The 25-year-old had played the villain with his retrospective ban for an ugly elbow on Ben White in Fulham's 3-0 defeat at Leeds on 27 June.

Fulham pulled off wins over QPR, Birmingham and Nottingham Forest in his absence, however - all without a recognised striker.

And while Parker's men still struggled for fluency, both the result and Mitrovic's goal will have Fulham buoyed up for a strong finish to the campaign.

Cardiff missed the chance to open up a four-point gap on seventh-placed Swansea, with their bitter rivals taking on Leeds on Sunday.

The visitors were left to rue Joe Ralls failing with two first-half chances, with Neil Harris' side unable to threaten after the break. 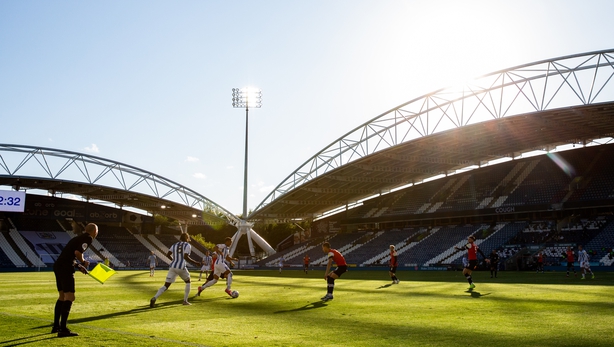 Second-half goals from Sonny Bradley and Elliot Lee lifted Luton off the foot of the table as they won 2-0 at Huddersfield to keep the Terriers firmly in the relegation battle.

Bradley headed home James Bree's 49th-minute corner before Lee lashed home a shot on the rebound with 19 minutes left to earn three vital points that move Luton above Barnsley before the Tykes face Wigan on Saturday.

The win means Luton are now just two points adrift of safety, with 21st place currently occupied by Stoke, where Hatters manager Nathan Jones began the season before being sacked in November having won only two of the first 14 games of the season.

Defeat was a bitter blow for Huddersfield, who are just one point further clear, and remain in danger of following Swindon, Wolves, and Sunderland in becoming the fourth team to suffer back-to-back relegations from the top flight to the third tier in the Premier League era.