Players raised gloved right fists and took a knee before Major League Soccer's first match in four months on Wednesday in a show of solidarity with the Black Lives Matter movement.

Some players wore t-shirts over their jerseys with the words 'Black and Proud' and 'Silence is Violence' before the match, and the Orlando City and Inter Miami starting line-ups took a knee just before the MLS is Back tournament kicked off.

The demonstration lasted eight minutes and 46 seconds, the amount of time Minneapolis police officer Derek Chauvin knelt on the neck of George Floyd, the 46-year-old black man whose death in late May sparked protests. 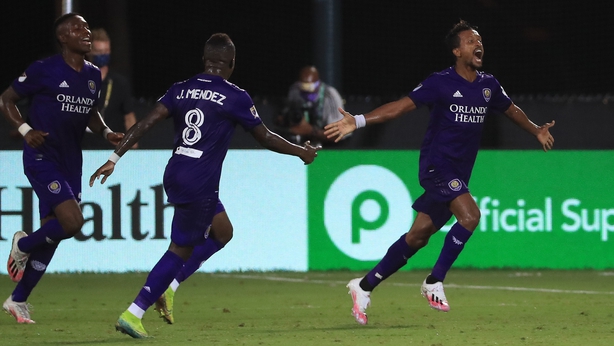 Juan Agudelo's opener on 47 minutes for Miami was cancelled out when Nani's probing cross found Chris Mueller on 70 minutes.

And the Portuguese sealed the winner in the seventh of ten minutes added on when the ball fell kindly to his feet and he found the net from just outside the six-yard box.

The match marked the first major US men's team sports competition since the coronavirus pandemic hit.

The tournament, being held without fans inside a biosecure 'bubble' near Orlando, has had a stuttering start.

All 26 MLS clubs were set to take part until FC Dallas were withdrawn on Monday after 10 players and a staff member tested positive for coronavirus.

On Tuesday, the Vancouver Whitecaps announced five members of the team would not make the trip to Orlando due to coronavirus concerns.

Those same concerns led LAFC’s Carlos Vela, the league’s reigning MVP, to opt out of the tournament on Monday.