The owner of Wigan says the coronavirus pandemic "fundamentally undermined" his ability to fund the club and left him with no option but to put it in administration.

The club's administrators have written to the UK lawyers of owner Au Yeung Wai Kay, asking him to be interviewed in regard to the circumstances which led to the crisis at the Latics.

Au Yeung's Next Leader Fund took formal control of the Sky Bet Championship side on 4 June. Twenty days later his legal representatives in the UK set in motion the process to appoint administrators, which was confirmed on 1 July.
The move has wreaked sporting and financial havoc on the club. They face a 12-point penalty for entering administration, which administrators confirmed on Tuesday they have appealed against.

All sorts of theories have been posited as to why the owner took the decision he did, but he says the financial impact of the Covid-19 outbreak was to blame.

"We bought Wigan Athletic with the best intentions: to create a team that would get the club back into the Premier League, and I have invested more than £40million (to buy it and repay a loan to former owners the International Entertainment Corporation).

"Unfortunately, the Covid-19 crisis has severely impacted people and businesses around the world - and Championship football clubs, which rely on fans coming through the turnstiles, are no exception.

"This has fundamentally undermined our ability to fund Wigan Athletic and, after struggling to find a solution, in the end took the difficult decision to put the club into administration to ensure its survival.

"The administrators are now doing everything they can to find a new owner who will secure the future of Wigan Athletic for the sake of the many thousands of devoted Latics fans, and the local community."

Off the pitch, 75 redundancies have been made so far among football and general support staff. The UK-based directors, chief executive Jonathan Jackson and executive chairman Darren Royle, have also been made redundant but are working for free to assist with selling the club.

Joint administrator Gerald Krasner said he and his partners had gathered some information regarding the events which led up to administration, but now wanted to hear from Au Yeung.

"Earlier today the administrators approved a letter from our solicitor to go to the owner's solicitor," Krasner said.

"That sets out a number of matters that we want clarifying and it invites the owner, if he will, to come to a Zoom meeting with us, with his lawyers if he wishes, so we can get the facts from his side as to the events leading up to administration and then compare them to the events that we've been told about, and see whether they agree or if there is a difference.

"I am hopeful that although I have no powers to force him to come to an interview, he would want to do his best for the football club, and with some gentle persuasion will agree to that interview."

Krasner would not comment on whether there would be a police investigation into the circumstances around the administration process, but said if there was it would not hinder the sale of the club.

He said that as of 11am on Tuesday morning 50 non-disclosure agreements had been sent out, and three of them had been returned with proof of funds of £10million. The administrators hope to settle on a preferred bidder by 21 July. 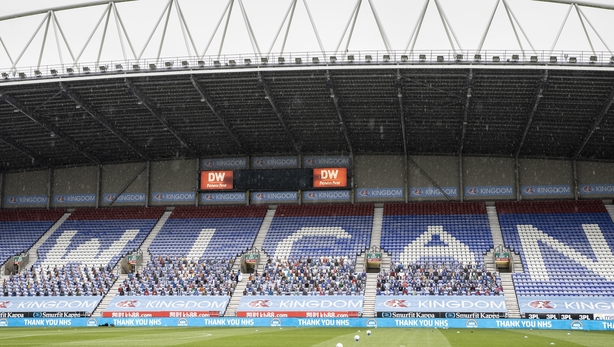 "The investigation is completely distinct from the sale," he said.

"I have told the people I have spoken to that have put the proof of funds in that whatever comes out of the investigation will not impact any sale."

"We strongly believe that Wigan Athletic is better being locally owned," read a statement from Lenagan and Gary Speakman.

"We are currently working with our longstanding advisers KPMG and talking to external parties.

"Our intention is to identify other investors quickly and start due diligence on the football club with the intention of making a bid in due course.

"We have made the administrators aware of our interest and hope to explore this with them further over the days ahead."

Players have received 20% of their pay, with administrators hoping to find the remaining 80 per cent via player sales. To that end, the club have appointed an agent to attract buyers, but were at pains to point out that the agent would not be paid by Wigan.

On the appeal, Krasner pointed out no club had ever successfully challenged the 12-point penalty for entering administration, which would be applied this season if the club stay in the Championship or to next season's table if they are relegated.

He said the administrators were also working on a strategy to ensure the club would not be liable to a further 15-point deduction for failing to pay creditors 25p in the pound.

"For the away games that will pay for the coaches, the hotels, for the home games it would pay for the doctors, the ambulances, any other requirements we need at games like stewards or the police," Stanley said.

"Even down to putting petrol in the lawnmowers to get the pitches mowed."

The administrators said a local firm, Each Way Travel, had agreed to cover the cost of getting the first team to their away fixture against Barnsley on Saturday.

The administrators met with local MP Lisa Nandy on Tuesday. She has called for a full inquiry into the circumstances around the administration and has asked the EFL to rescind the points penalty.