The Lions had lost to Derby and drawn with Barnsley and Swansea heading into Friday night's trip to The Valley.

And for large swathes of an uncompromising encounter the visitors looked to be grinding towards another share of the spoils.

But Cooper reacted quickest when it mattered most, to swipe all three points for Gary Rowett's side who are now eighth, two points outside the play-off places.

Republic of Ireland Under-21 international Jayson Molumby started in the middle of the park but made way for Ben Thompson at half-time, while his compatriot Shaun Williams came on for Jed Wallace in the 86th minute.

Josh Cullen and Aiden McGeady both started for the hosts.

An incongruous bout of fireworks in the stadium's vicinity proved at complete odds with matters on the pitch.

Sparks were few and far between, with a goalless first-half neither surprising nor wholly unfair. 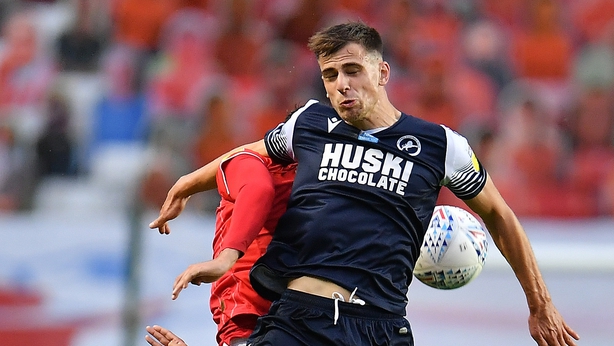 Matt Smith should have done better with a snap header for the visitors, while Charlton's Macauley Bonne struck straight at Bartosz Bialkowski when through one on one.

Wallace tiptoed round the back for the Lions in the move of the half, but could only side-foot straight at Phillips.

Tomer Hemed rolled neatly away from cover as Charlton hit back, but the former Brighton winger blazed high and wide from his shot on the spin.

Chuks Aneke drilled the first shot on target of the second-half, some 20 minutes after the break.

Aneke wasted another fine opening with a scuffed cross as the game started to break up.

That spurred Millwall into action, and replacement striker Tom Bradshaw was a boot's length shy of a close-range finish, missing a low cross instead of poking home.

The Lions continued to press, and finally a breakthrough was forthcoming when Cooper lashed in after Mahoney's long-range effort.

Mahoney cut in from the left and fired goalwards from 20 yards, in a strike that Phillips could only parry back into his six-yard box.