West Brom moved to the top of the Sky Bet Championship table despite being held to a goalless home draw with Birmingham, who had Republic of Ireland striker Scott Hogan starting in attack.

The Baggies failed to score for a third straight league game as they made their comeback after the three-month enforced break due to the coronavirus pandemic.

It moved Slaven Bilic's side above Leeds - who play on Sunday - but they missed the chance to take full advantage of third-placed Fulham's slip.

The Cottagers saw their automatic promotion hopes dented courtesy of a 2-0 defeat at home to fellow high-flyers Brentford.

Late efforts from Said Benrahma and Emiliano Marcondes secured victory for the Bees, with the goals coming in the 88th minute and in the first minute of stoppage time, as they moved within one point of their opponents.

Louie Sibley marked his second league start in style as his hat-trick led Derby to a 3-2 victory at Millwall and boosted their play-off chances.

The 18-year-old only made his Rams debut earlier this season and also marked his full Championship debut with a goal before the shutdown. 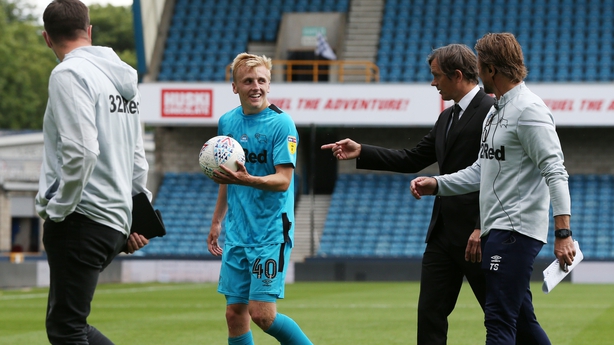 Matt Smith put Millwall ahead in the 15th minute before Sibley grabbed his first goal 11 minutes later. The midfielder doubled his tally in the second half before completing his treble in the final minute, before Connor Mahoney netted a stoppage-time consolation.

Derby's third successive league win either side of the break leaves them just three points adrift of the play-off positions despite sitting in 12th place.

Nathan Jones began his second spell in charge of Luton with a 1-1 draw with Preston thanks to Callum McManaman's wonderful 86th-minute equaliser.

Jones returned to Kenilworth Road after an ill-fated tenure at Stoke before replacing his successor Graeme Jones, who left his role during lockdown.

Scott Sinclair opened the scoring for Preston, who had the Irish duo of Sean Maguire and Alan Browned in their ranks.

The Lilywhites remain in the final play-off place.

Callum O'Dowda's Bristol City are without a league win in six games after a 3-1 reverse at Darragh Lenihan's Blackburn.

Jamie Paterson put the Robins ahead in the first half but Corry Evans, Tosin Adarabioyo and Adam Armstrong turned the match around for Blackburn, who climbed above their opponents into seventh.

Rhian Brewster provided Swansea with a winning return to action as he bagged a quick-fire brace in the 3-0 win over struggling Middlesbrough. Andre Ayew converted a first-half penalty as the Welsh outfit effectively wrapped up the points inside 34 minutes.

Charlton, with on-loan Aidan McGeady in midfield, climbed out of the relegation zone following a crucial 1-0 win at Hull.

Jason Pearce's 19th-minute goal proved enough for the visitors to move up to 19th in the table, with the Tigers dropping into the relegation zone.

Elliot Simoes' eighth-minute strike earned a 1-0 triumph for Barnsley at QPR, who had Galway's Ryan Manning and Dubliner Conor Masterson in defence, to move within four points of safety.

Reading were held to a 1-1 draw at home to Stoke, who had manager Michael O'Neill in the dugout after testing positive for Covid-19 earlier this month, while Connor Wickham struck in stoppage-time for Sheffield Wednesday to cancel out Joe Lolley's earlier effort in a 1-1 draw at home to Nottingham Forest.