Republic of Ireland attacker Aaron Connolly rose off the bench to produce a brilliant 94th-minute assist for Neal Maupay that saw relegation-threatened Brighton and Hove Albion earn a huge victory against Arsenal at the Amex Stadium.

Maupay, who also scored the winner at the Emirates Stadium in December, calmly lifted the ball over substitute Gunners goalkeeper Emiliano Martinez deep into added time to repeat the 2-1 scoreline from their earlier encounter and secure Albion's maiden success of 2020.

It was a goal fashioned by a delicious flicked pass by Connolly and a timely reminder to Ireland boss Stephen Kenny - who has managed the Galway man at Under-21 level - of what he's capable of.

Nicolas Pepe's superb second-half strike had put the visitors on course for a much-needed victory in their pursuit of European qualification, but Seagulls captain Lewis Dunk quickly scrambled an equaliser.

A miserable day in the south coast sunshine for Mikel Arteta's men was compounded by a serious-looking knee injury suffered by first-choice keeper Bernd Leno.

Germany international Leno was carried off on a stretcher shortly before half-time having been left writhing in agony after falling, following a nudge from Frenchman Maupay.

The Seagulls' overdue win - their first since 28 December - puts distance between them and the bottom three ahead of a daunting run of fixtures against Leicester, Manchester United, Liverpool and Manchester City. 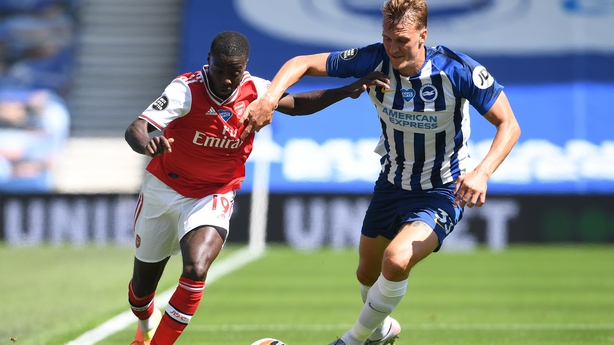 Arteta's side travelled south with a point to prove following a midweek mauling at Manchester City.

They initially showed no ill effects of that 3-0 loss with a fast-paced start which almost brought an early breakthrough.

Attacking duo Lacazette and Pepe had been recalled as part of five changes by the visitors, who lost Granit Xhaka and Pablo Mari to injury and David Luiz to suspension three days ago, while Mesut Ozil was afforded a place on the bench.

The hosts were in action for the first time in 105 days and originally appeared slightly rustier than their opponents as they struggled to create in the absence of a vocal home support, which had been partly replaced by a host of cardboard cutouts.

After stunning a Gunners side under the caretaker management of Freddie Ljungberg late last year, Albion had won only once in 15 fixtures in all competitions and not tasted success since the turn of the year.

Just after the half-hour mark, they were indebted to keeper Ryan as he impressively clawed away a goal-bound diving header from Lacazette following a Saka cross.

Arsenal's growing momentum was soon disrupted though as they lost Leno. 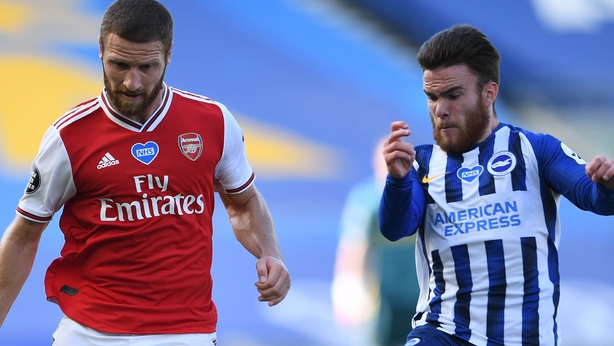 Substitute Martinez was called into immediate action to stop a thunderous low drive from Aaron Mooy as Brighton registered a first attempt on target shortly a goalless first half was brought to an end.

Gunners top scorer Aubameyang, seeking his 50th Premier League goal, twice tested Ryan in the second period, either side of correctly having a cool finish chalked off by an offside flag and subsequent VAR check.

Moments after Ezequiel Schelotto headed straight at Martinez, the away side deservedly edged ahead thanks to only Pepe's fifth league goal since his £72m transfer from Lille.

The Ivorian collected the ball wide on the right, switched the ball to his left foot before curling a delightful strike into the top left corner.

Given the hosts lack of attacking threat, Arsenal looked well place to see the game out.

However, Connolly came on with 20 minutes to go and helped turn the game on its head.

Arsenal were made to pay as centre-back Dunk poked home from close range 15 minutes from time following a right-wing corner.

On the balance of play, Albion may have been content with a single point, but they finished with all three after Maupay coolly lifted the ball over Martinez five minutes into stoppage time having darted on to Connolly's inch-perfect lay-off.