Brighton and Hove Albion boss Graham Potter said Republic of Ireland attacker Aaron Connolly is looking "fit, strong and sharp" as he backed the Galway man to spearhead the Seagulls' fight against the drop.

With nine games to play in the Premier League, Brighton are just two points above the relegation zone.

Connolly injured his knee back in March and looked like he'd miss the rest of the campaign, but the coronavirus-enforced delay to the action has given him time to recover.

He's now raring to go for the clash with Arsenal on Saturday at the Amex, which is good news for Brighton and good news for Ireland boss Stephen Kenny, who'll be keeping a close eye on the dynamic 20-year-old.

"He has come back well and worked hard after the break," Potter told The Argus.

"The physios have done a really good job on him. He is looking good, he is looking fit and strong and sharp and I think he can definitely help us over nine matches.

"He is a young player and a sprinter so you have to be careful with his recovery times.  I think he will be ready to help us that is for sure." 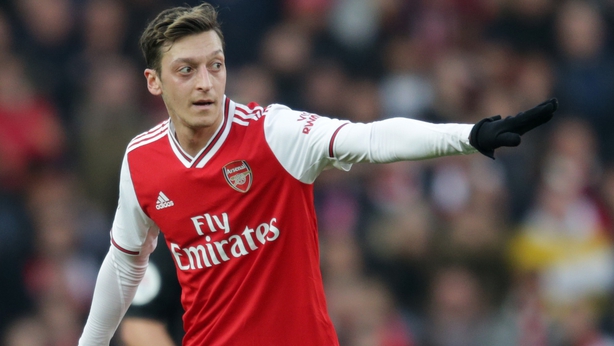 Meanwhile Gunners playmaker Mesut Ozil has been told by his manager Mikel Arteta that he must rediscover his best form in training to win back his place in the starting line-up.

Ozil was a regular in Arteta's side before the league was suspended but the German was left out of the squad altogether at a game at Manchester City on Wednesday, where Arsenal were defeated 3-0.

Arteta had said that the decision was "tactical".

"I'm the first one who wants Mesut at his best. I'll put him on the pitch when I think he can give his best," Arteta said.

"A lot has happened to him in the last few weeks and I have to respect the timing of every player. Sometimes they need a bit of time."

Arteta said that he had no problems with Ozil after a "clear and honest" talk following his omission from the team.

"He was very well with me. There were no issues at all," Arteta added. "My conversation with Mesut is going to remain with him and me. It was a clear and honest conversation."

Arsenal are ninth in the league with 40 points from 29 matches.