Ireland's Euro 2020 play-off encounter with Slovakia has been set for 8 October, UEFA confirmed this afternoon.

Should Stephen Kenny's side beat Slovakia, they will then face the winners of Northern Ireland and Bosnia Herzegovina on 12 November.

If Ireland win that play-off final, they will qualify for next summer's European championships, which have been deferred from summer 2020 as a result of the coronavirus, and would play two of their group games at Dublin's Aviva Stadium.

Meanwhile, the FAI has confirmed that Kenny's first competitive fixture as national manager will be an away match against Bulgaria on 3 September.

Ireland will play their opening UEFA Nations League fixture in Sofia, followed by a home clash against Finland on 6 September, which will be Kenny's first competitive home match as Ireland manager.

Speaking to FAI.ie, the Ireland manager said: "It is good to have clarity now in relation to the forthcoming games in the UEFA Nations League and the EURO 2020 play-offs.

"I am also pleased that we will get two competitive games in September to help us in our preparations before the play-off against Slovakia in the first game the following month.

"As a coaching staff, we have already been planning for all the games later this year and now that we have definite dates for all the fixtures, we can plan with more detail." 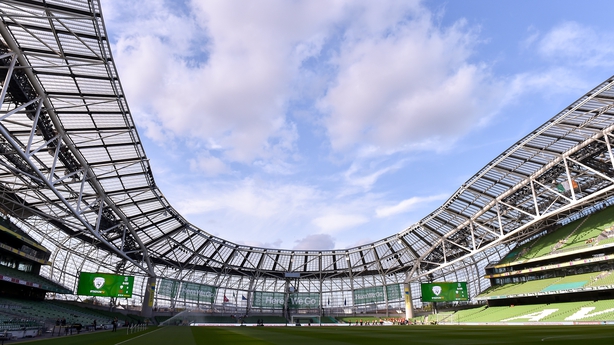 Meanwhile, all 12 Euro 2020 host nations have been confirmed to host next year's tournament, which will begin on 11 June, 2021, finishing on 11 July at Wembley Stadium.

Spain will take on Sweden in Group E's other game on the same date in Bilbao, while Sweden will then take on the play-off winner in Dublin on 18 June with a 3pm kick-off.

Should Ireland qualify, they will play their final group game against top-seeded Spain away in Bilbao on Wednesday 23 June (kick-off 6pm) at the same time as Sweden and Poland face off in Dublin.

The Round of 16 match to take place in Dublin on Tuesday, 29 June will feature the winners of Group D taking on the runners-up in Group F (kick-off 6pm).

UEFA president Aleksander Ceferin said: "I am delighted that we are able to resume almost all of our competitions. I am confident that we will not have to endure the fans' absence for long and that they will be allowed into stadiums sooner rather than later.

"UEFA took a bold decision when it decided to postpone Euro 2020.  But in doing so, we created the space which has allowed domestic club competitions across the continent to resume, where possible, and play to a conclusion.

"While the game has suffered huge difficulties as a result of the pandemic, those blows would have landed much harder if we had not shown leadership in those early days."