A day short of the two-year anniversary of Ireland's famous win in Stuttgart, England once again were the dream opponents for Jack Charlton’s history-makers as they embarked on a maiden World Cup campaign.

If the 1-0 scoreline in Euro 88 shocked the footballing world – nowhere more so than on these shores – two years later, the Boys in Green were a pretty formidable outfit in their own right.

While team captain Bryan Robson admitted in the lead-up to the crunch encounter that the Three Lions would have preferred to have avoided their Group F opponents until a later stage in the tournament, Bobby Robson’s side looked well primed for a tilt at emulating the 1966 crop.

With the attacking threats of Waddle, Barnes, Beardsley and Lineker, an exhuberent Paul Gascoigne pulling the strings in the middle and a grizzled defence of Stevens, Butcher, Walker and Pearce, it was a side that would go on and reach the final four.

In the lead-up to their tournament opener however, Charlton’s side were hogging the limelight with their travelling army of fans.

Back home and things were working up to fever pitch.

The editorial on the Irish Independent on the day of the game in Cagliari laid out the sense of occasion for anyone who may have been unaware of the enormity of the clash.

"Suddenly, it’s here...the moment we thought would never come. It has been such a long time coming...years of sweat and tears, of brave defeats, of unbearable disappointments. 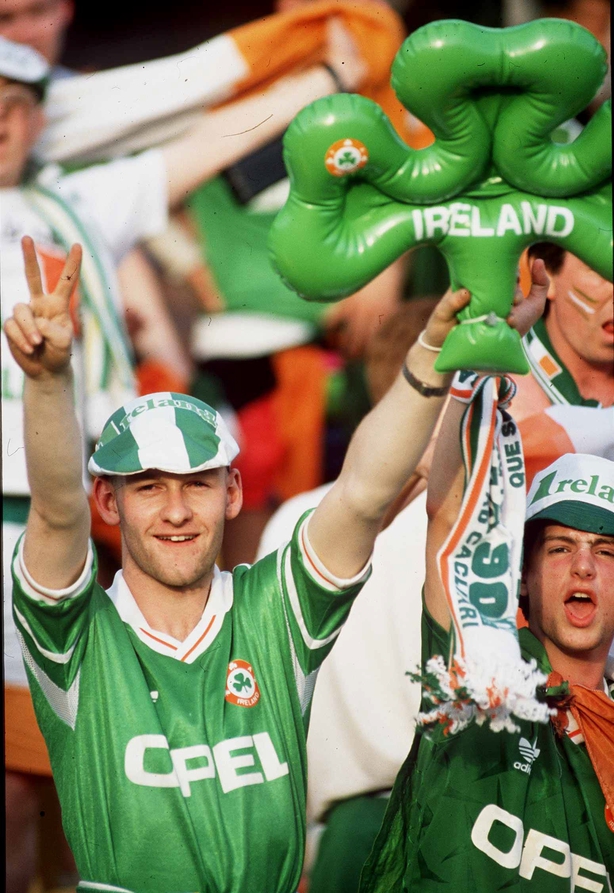 "Now, in Ireland’s finest sporting hour, it is difficult to remember them. Tonight, Ireland will take her place among soccer’s elite at the Sant Elia Stadium in remote Sardinia.

"The moment is almost upon us. You can feel it in the warm Cagliari air – the buzz and excitement which no other happening could generate.

"Once you woke up yesterday morning, you could just feel the charged atmosphere. It was a very special feeling. Who among us will not feel a lump in the throat at 8.0 tonight?

Not that everyone was necessarily buying into the feel-good factor.

Actor Mick Lally is quoted in the Examiner the day before the match and it’s clear that the hype machine was not overly impacting the Glenroe star.

"Soccer is the most excruciating, boring and totally over-rated game on God’s Earth," before adding that players are vastly over-paid to kick around a ball of leather on a pitch. Still, his patriotic pride was not in question.

"I’d be delighted to see Ireland winning I must admit."

The previous day, writing in his Sunday Independent column, Eamon Dunphy again laid bare his reservations on the style of football imposed by manager Jack Charlton.

Famously there was no love lost between the pair and Dunphy attempted to delve a little deeper into the man in the Irish hotseat.

"Explaining Jack is the ultimate challenge to a print journalist," he wrote. "He is at once complex and simple, a mass of contradictions, yet strangely the same in private as the public man you see. 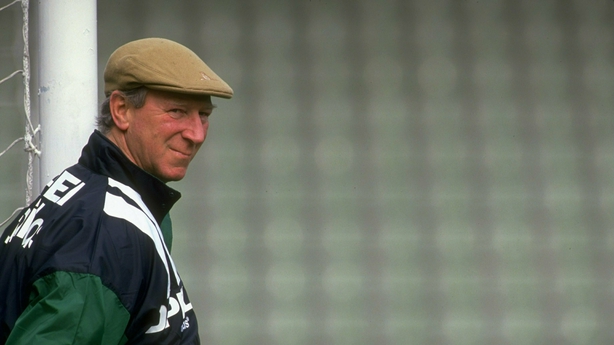 "I spent a couple of evenings getting jarred with former Leeds players in recent weeks, trying to learn more about the man who has inspired one of the great Irish adventures of all time."

It’s not clear whether he gleaned anything he didn’t previously know during those booze-filled chinwags, but the former international didn’t subscribe to the view of Charlton being some sort of footballing messiah.

"I believe we would have achieved what we have led by any good manager," before predicting a win over our neighbours and perhaps a journey as far as the quarter-finals of the competition, "maybe even more than that".

A number of players penned columns during the World Cup and centre-back Kevin Moran in the Independent said that he was nervous as to whether he would make the cut for the big game.

"Just now, I don’t know if I will be playing against England. That’s a strange feeling, but one that quite a few of us are experiencing right now."

Tonight I play the most important game of my life and I confidently predict that we will beat England on a scoreline of something like 2-1.

Packie Bonner however was a little more bullish in the Evening Press, even offering readers a scoreline.

"Tonight I play the most important game of my life and I confidently predict that we will beat England on a scoreline of something like 2-1."

Despite Moran’s comments, in truth there were few major selection debates, but one centered on the heart of the defence.

Could David O’Leary force his way in, despite falling down Big Jack’s pecking order? 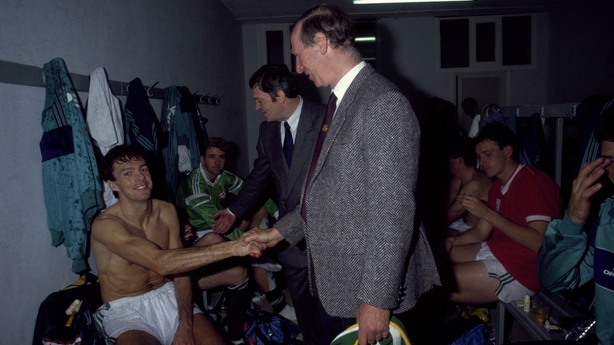 "If O’Leary is omitted again it will be nothing short of a tragedy," wrote Noel Spillane in the Examiner, "for his pace and covering sense would help nullify the threat of Lineker, Barnes and Waddle."

Former Ireland manager Liam Tuohy in the Evening Press was singing from the same hymn sheet.

"Big Jack must push her personal prejudices to one side and pick David O’Leary in the back four for tonight’s World Cup opener, because without the leggy Arsenal man, it could be a disastrous debut for our lads."

McCarthy held his hands up in the dressing room for his part in Gary Lineker’s opener, with Kevin Sheedy’s long-range strike 17 minutes from time ensuring a share of the spoils on a wet and windy evening on the Mediterranean.

'A point for the team, a win for the fans' ran the Examiner headline, while the Evening Press went for the more artistic 'My Left Foot’ in a nod to both the goalscorer and the Academy-award winning film from the previous year.

In his column, goalkeeper Bonner paid tribute to the fans and his team-mates, while also suggesting that their opponents flattered to deceive on the big stage.

"There was hardly an English player that stood out. John Barnes again disappointed," the Celtic netminder opined.

Noel Spillane’s match report was full of praise for the Irish spirit shown on the night, but wasn’t convinced that there was an abundance of quality on display.

"While Ireland shaded the opening half, they created little in the way of clear chances," he wrote.

"Although the swirling wind was an obvious factor, I lost count of the number of times Irish players overhit their passes and they wasted loads of possession from poorly executed set-pieces."

It didn’t chime with Moran’s recall of the game shortly after the full-time whistle.

In his column, the Blackburn Rovers man says he was happy overall how he marshalled Peter Beardsley and says his team grew into the contest.

"We may have begun like timid rabbits, but we finished like hungry lions...All the good football came from us in the game, and we showed we aren’t just kick and rush, we had a chance to knock it around a bit too."

Being easy on the eye was never part of the Charlton prerogative and in his summation of the match, Vincent Hogan in the Irish Independent insisted aesthetics had little to do with it.

"It proved about as pretty as pylon. But beauty was never anticipated as part of this equation. It was a grapple for survival, nothing grander."

His players ratings had goalscorer Sheehy, Andy Townsend and Paul McGrath as the leading Irish lights, with only John Aldridge and Ray Houghton carding below 7.

The following week in his column, Dunphy would reflect on the two reasons why he felt Ireland managed a draw against one of the pre-tournament favourites.

"We were courageous when we had to do battle, and in one inspired moment, Kevin Sheedy scored a brilliant goal which allowed us glimpse qualities that lie submerged beneath the superficially rugged surface known to the world as Ireland."