World soccer's governing body FIFA has asked competition organisers to use "common sense" with players who display messages of protest over the death of George Floyd, the unarmed black man killed in police custody in the United States.

FIFA regulations bar players from displaying any "political, religious or personal slogans, statements or images" on their kit.

Since 2014, this ban has included undershirts - a response to players lifting up their shirts to display a message when scoring.

However, several players protested during matches in Germany's Bundesliga at the weekend, with Borussia Dortmund's Jadon Sancho and Achraf Hakimi displaying undershirts with the message, "Justice for George Floyd" on Sunday.

Schalke 04 defender Weston McKennie displayed the same message on his armband in another game, while Borussia Moenchengladbach's Marcus Thuram knelt to honour Floyd after scoring against Union Berlin. 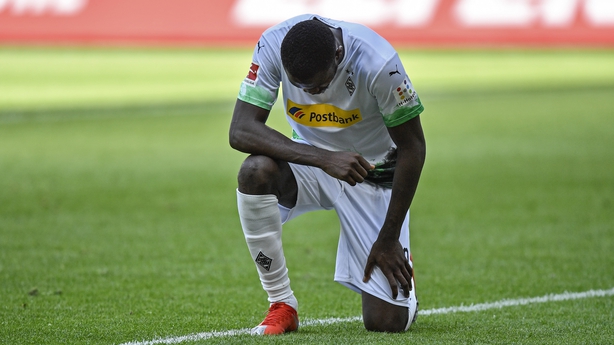 The German Football Association has said it was reviewing the incidents where the message was shown.

In a statement on Tuesday, FIFA said it "fully understands the depth of sentiment and concerns expressed by many footballers in light of the tragic circumstances of the George Floyd case".

It added that applying the laws of the game was the responsibility of competition organisers, such as domestic leagues, who FIFA said "should use common sense and have in consideration the context surrounding the events".

"FIFA had repeatedly expressed itself to be resolutely against racism and discrimination of any kind and recently strengthened its own disciplinary rules with a view to helping to eradicate such behaviors," it added in the statement.

"FIFA itself has promoted many anti-racism campaigns which frequently carry the anti-racism message at matches organised under its own auspices."