Bayern Munich maintained their four-point lead at the top of the Bundesliga after an entertaining 5-2 win over Eintracht Frankfurt.

Goals from Leon Goretzka, Thomas Muller, Robert Lewandowski and Aphonso Davies did the damage - along with a Martin Hinteregger own goal - as Borussia Dortmund are kept at arm's length ahead of Tuesday's crunch meeting that could have a big say in the title race.

Indeed, if Hansi Flick's men can beat Dortmund they will take a massive step towards an eighth successive Bundesliga crown.

But their lax defending from set-pieces will be a cause for concern as two Hinteregger goals at the right end for Frankfurt in the space of four second-half minutes briefly threatened to derail the hosts' evening.

Frankfurt have been troublesome opponents for Bayern this season as it was Frankfurt's 5-1 win in November's reverse fixture game that prompted the sacking of Niko Kovac.

But there was never really any chance of a repeat, even with the Allianz Arena eerily empty.

The writing was on the wall in the opening 15 minutes as Bayern wasted two chances to go in front, first Lewandowksi thundering an effort into the crossbar from a corner and then Benjamin Pavard heading straight at Kevin Trapp when it seemed easier to score. 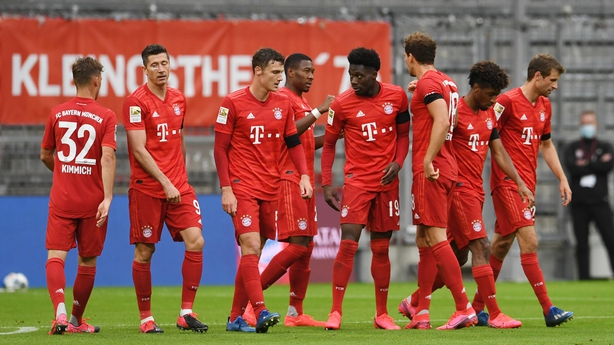 The opener eventually came in the 17th minute and it was a fine move as Muller was set free down the left and he pulled it back for Goretzka, who arrived late in the area with a classy finish.

It was total home domination but Bayern had to wait until the 41st minute to double their lead.

Davies had space on the left and found Muller, who tucked it away well, with the goal allowed to stand after a lengthy VAR check.

When Lewandowski scored his 42nd goal of the season just 45 seconds after the restart, Frankfurt would have been fearing the worst.

The Poland striker powered home a header from Kingsley Coman's cross to put his side three up.

But Bayern's vulnerability from corners was highlighted twice in the space of four minutes as Frankfurt hauled themselves back into the game.

First Hinteregger converted at the second attempt after he was inexplicably allowed to retrieve his first header and then from their next attack, the defender sent in a glancing header after no one tracked his run.

But just after the hour, Bayern calmed their nerves and re-established their grip on the game, as Davies fired home from inside the area.

It became something of a rout 16 minutes from time when Hinteregger got his feet tangled after Serge Gnabry closed in on goal and put the ball into his own net.

Borussia Dortmund scored a goal in each half through Raphael Guerreiro and Achraf Hakimi to beat hosts VfL Wolfsburg 2-0 on Saturday and stay on the heels of Bayern.

Portugal international Guerreiro tapped in a cutback from Thorgan Hazard after Erling Haaland had failed to connect in the 32nd minute, and Hakimi fired in from a fine Jadon Sancho assist in the 78th to make sure of the three points.

The result lifted Dortmund to 57 points, one behind Bayern, who are in action against Eintracht Frankfurt later on Saturday.

The Bundesliga resumed last week with no fans, after more than two months of suspension due to the Covid-19 pandemic.

With Tuesday night's potential title decider against Bayern Munich looming, Dortmund, who started the day four points adrift of their rivals, knew they could not afford any slip-ups.

But although they made a lively start they created few clear-cut chances and Wolfsburg's Wout Weghorst came close to giving his side the lead with a 25th minute header.

Dortmund settled their nerves in the 32nd minute when Guerreiro knocked home an unmissable opener from close-range after Thorgan Hazard drove the ball across the six-yard box. 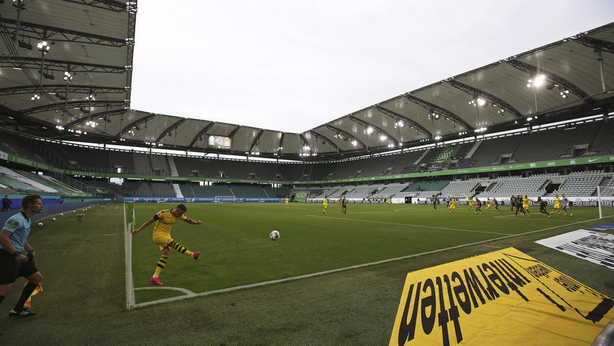 Hazard came close to increasing Dortmund's lead just before the break but he just failed to react quickly enough to reach a similar ball across the box from Hakimi.

The home side started the second half in impressive fashion and should have equalised in the 48th minute when the unmarked Renato Steffen ballooned a simple effort over the bar with only keeper Roman Burki to beat.

Daniel Ginczek came close from a tight angle before Weghorst caught the visiting defence napping with a dangerous ball across the face of the box which eluded his team-mates.

Sancho made his introduction when he replaced Julian Brandt in the 65th minute and, after flapping at his first effort, he turned provider with his mazy run and unselfish lay-off to Hakimi.

Klaus was rightly dismissed for his hack at the back of Akanji's leg four minutes later, then Sancho turned provider again to flick Haaland clear, only for the in-form striker to uncharacteristically fluff his chance to make it three.

Elswhere, Kai Havertz scored a brace for the second match in the row to lead Bayer Leverkusen to a 3-1 win at Borussia Moenchengladbach as they leap-frogged their opponents to go third.

The game was played behind closed doors but the stands were brightened by around 20,000 cutouts of real Gladbach fans, who had paid €19 each to have their cardboard images placed in the stadium.

Havertz, 20, fired Leverkusen ahead in the seventh minute and, although Marcus Thuram levelled in the 52nd minute, Havertz struck again from a penalty six minutes later after Nico Elvedi felled Karim Bellarabi with a late sliding challenge.

Sven Bender headed in a third from a free kick in the 81st minute to leave Leverkusen third with 53 points, one ahead of Gladbach who dropped to fourth.

Ireland U19 international Conor Noss was not named among the Moenchengladbach subs.

Werder Bremen midfielder Leonardo Bittencourt scored a brilliant first-half winner to seal 1-0 victory at Freiburg that reignited their hopes of staying in the Bundesliga.

The victory at an empty Schwarzwald stadium helped 10-man Bremen reach 21 points from 26 games, boosting their bid to avoid being relegated for the first time in 40 years.

Paderborn replied quickly through Dennis Srbeny to an early Robert Skov goal for Hoffenheim to grab a 1-1 draw, their second draw in two games since league play resumed following the coronavirus pandemic.