Celtic have been crowned Ladbrokes Premiership champions for a ninth successive time while Hearts have been relegated after the top-flight clubs reached a unanimous decision that the season could not be concluded.

The Scottish Professional Football League announced the widely-anticipated decision following a meeting with all clubs on Monday, with the campaign determined on a points per game average.

SPFL chairman Murdoch MacLennan said in a statement: "Firstly, I would like to take this opportunity to officially congratulate Celtic on their achievement of winning the Ladbrokes Premiership this season, and also to sincerely commiserate with Hearts on their relegation."

The season was halted on 13 March because of coronavirus, with Celtic 13 points clear of Glasgow rivals Rangers, albeit having played a game more.

The only change in the final, points-per-game based placings was St Johnstone climbing above Hibernian into sixth place. 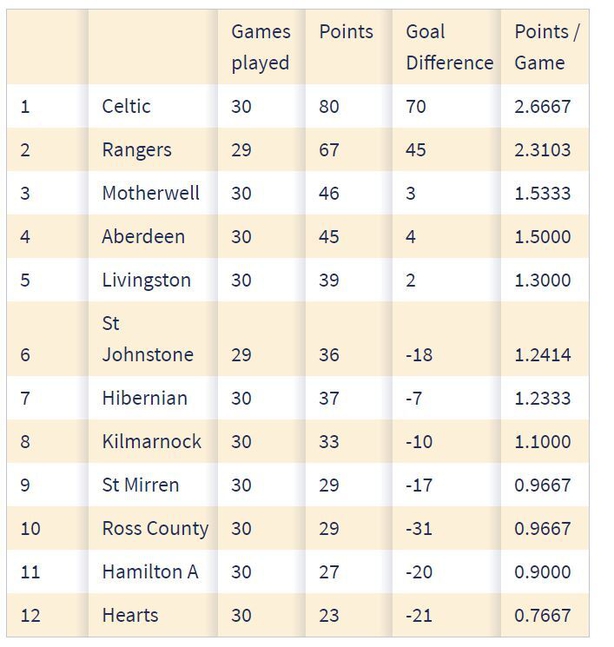 MacLennan continued: "We would all have rather seen the league season played out on pitches, in stadiums and in front of supporters.

"This is not the way anybody involved with Scottish football would have wanted to conclude the league season but, given the grave and unprecedented circumstances that we are facing, the board has agreed that it is the only practical way forward.

"Covid-19 has wreaked havoc on sporting competitions around the world and the repercussions will be felt for a long time.

"Scottish Government restrictions and deep concerns for both player and spectator safety left the SPFL with no realistic option but to call the Ladbrokes Premiership now and we thank the Premiership clubs for their support on this decision."

Our Way, Our Nine, Our Time. 🍀⚪#StayHomeStaySafe pic.twitter.com/Du0wWNJJ5w

Celtic were quick to share their delight, tweeting: "Today Celtic have been declared Scottish Premiership Champions for the 9th season in a row.

"We have dominated the Premiership, winning 26 games out of 30. We have scored 89 goals, conceded just 19, and established a commanding 13-point lead at the top of the table. We are champions for a reason.

"We dedicate this victory to you. To all our supporters. To the key workers who are saving lives, cleaning hospitals, stacking shelves and shielding loved ones at home. Our 9, is your 9."

However, there was caution from the champions, who added: "We want Celtic fans all over the world to celebrate in style, but, of course, safety is the number one priority for all, and for now this means celebrating in our homes. We all must stay safe and stay home. Please DO NOT come to Celtic Park.