When the 2005 League of Ireland season began, Drogheda United had never won the Premier Division nor the FAI Cup.

The Louth club had enjoyed First Division success and League of Ireland Cup honours but the big two prizes had eluded them.

That all changed on 4 December 2005 when Drogheda defeated newly crowned league champions Cork City in the FAI Cup final, kicking off a two-year spell when the league title (2007) and back-to-back Setanta Cup titles would arrive in the trophy cabinet.

On this week's RTÉ Soccer Podcast, Declan 'Fabio' O'Brien and Gavin Whelan, Drogheda's goalscorers at Lansdowne Road in that decider a decade and a half ago, joined us to reminisce.

O'Brien's goal had arrived on 83 minutes, just over half an hour after Whelan had got Drogheda's crucial opener.

"I knew it was late on in the game so I knew it would be a clincher of a goal and a huge moment for the club," said O'Brien who captained the team on the day.

"It did all flash by me at that time because I had a lot of time to think about the finish to be honest and there was a huge crowd. I think there were nearly 30,000 people that day in the old Lansdowne and all the family were there.

"But [the FAI Cup] was our real big one and put us on the map, the moment where people started to take Drogheda seriously I think a little bit." 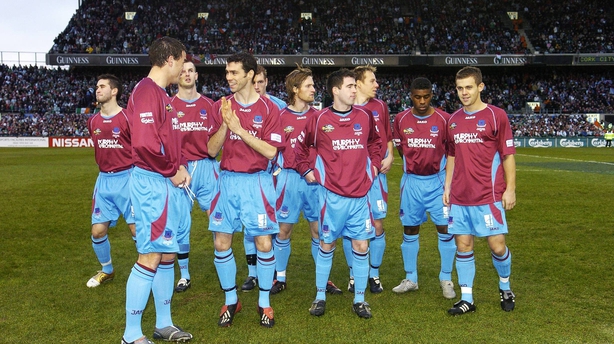 O'Brien feels the club earned respect by overcoming a talented Cork side and that it paved the way for further success, as well as spurring interest in the local area.

"The whole town got behind us and people started coming out the woodwork which was great," he said.

"We wanted people to start coming to Drogheda again. It's a real hotbed for soccer and that awakened the whole town and people started having a real appetite for the game.

"You saw a lot of money then coming into the club, a lot of investment."

Meanwhile, Whelan remains in awe of the scenes in West Street in Drogheda on victory night.

"It's the stuff dreams are made of for footballers," he said, adding that the day still gives him "goosebumps".