For the Irish footballers who go abroad to try and build a career, the UK has tended to be the main destination.

Whether it be in England's top flight or north of Hadrian's Wall in Scotland, clubs at all levels have had, and continue to staff, Irish talent.

What is less common however, is the prospect of moving further afield to the leagues on the European continent.

There are high-profile exceptions of course. Liam Brady's decade in Italy, including trophy wins with Juventus, stands out particularly for the longevity.

Robbie Keane, of course had a short stint with Inter Milan 20 years ago, Aiden McGeady spent time at Spartak Moscow and Cillian Sheridan has traversed many countries as a professional, while current Republic of Ireland and Shamrock Rovers midfielder Jack Byrne is another who enjoyed a promising loan spell with SC Cambuur in the Netherlands.

There are other notable examples, while some other Irishmen came close to moving to the continent like Niall Quinn, who still has some regrets that a deal with Sporting Lisbon fell through (before Phil Babb made the move later), Gary Breen and Richard Dunne, who attracted the interest of Inter Milan and Malaga respectively.

But let's hear from some of those who did experience life further afield. First up in our new series is Ireland's former record goalscorer Frank Stapleton, whose maiden experience beyond English football was with Ajax in 1987. 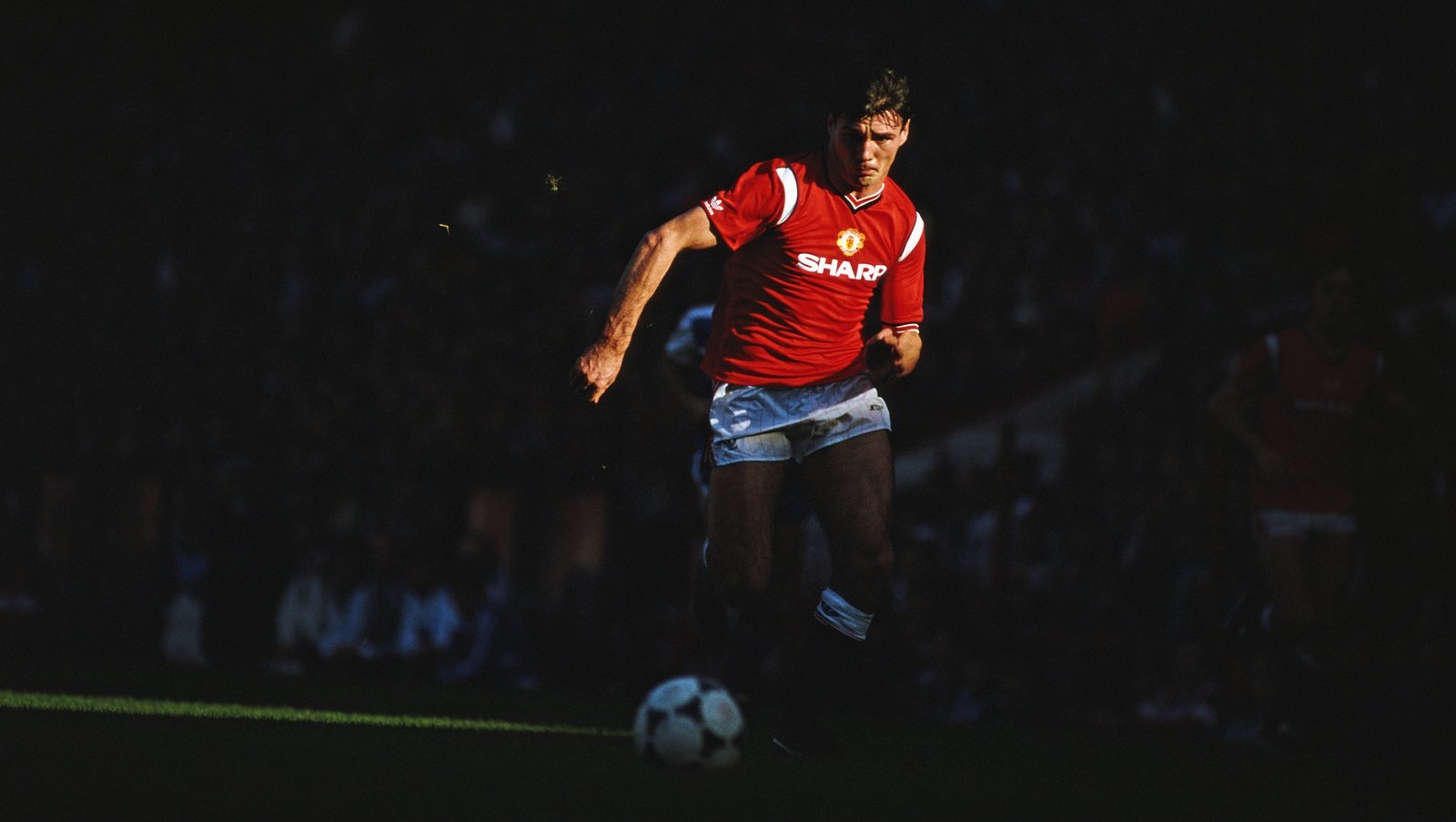 Stapleton with Manchester United in 1985

By the time summer 1987 rolled around, Alex Ferguson had not long been in charge at Manchester United, where then-Ireland captain Stapleton had led the line since leaving Arsenal in 1981.

But things at Old Trafford were changing, and a former Manchester United team-mate played the role of matchmaker as Ajax legend Johann Cruyff sought a striker to help fill the void left by a certain Marco van Basten leaving for AC Milan.

That former United colleague was Arnold Muhren who had left Old Trafford two years previously for a return to Ajax, with whom he had won a European Cup in 1973.

"It was Arnold that had recommended me to Johann Cruyff at the time and that's how it came about," Stapleton tells RTÉ Sport.

"I initially got a call from him and then made the enquiry. My contract was up at Man United and the rules were different in those days, you still had to contact them.

"So we went ahead and spoke with them and it came from there. But yeah, Arnold had a big impact on it and when I met Cruyff, it was fantastic."

The lure of Ajax was not lost on Stapleton given their illustrious standing in the game. At that time, they had already won three European Cups in '70s as well as numerous league titles. 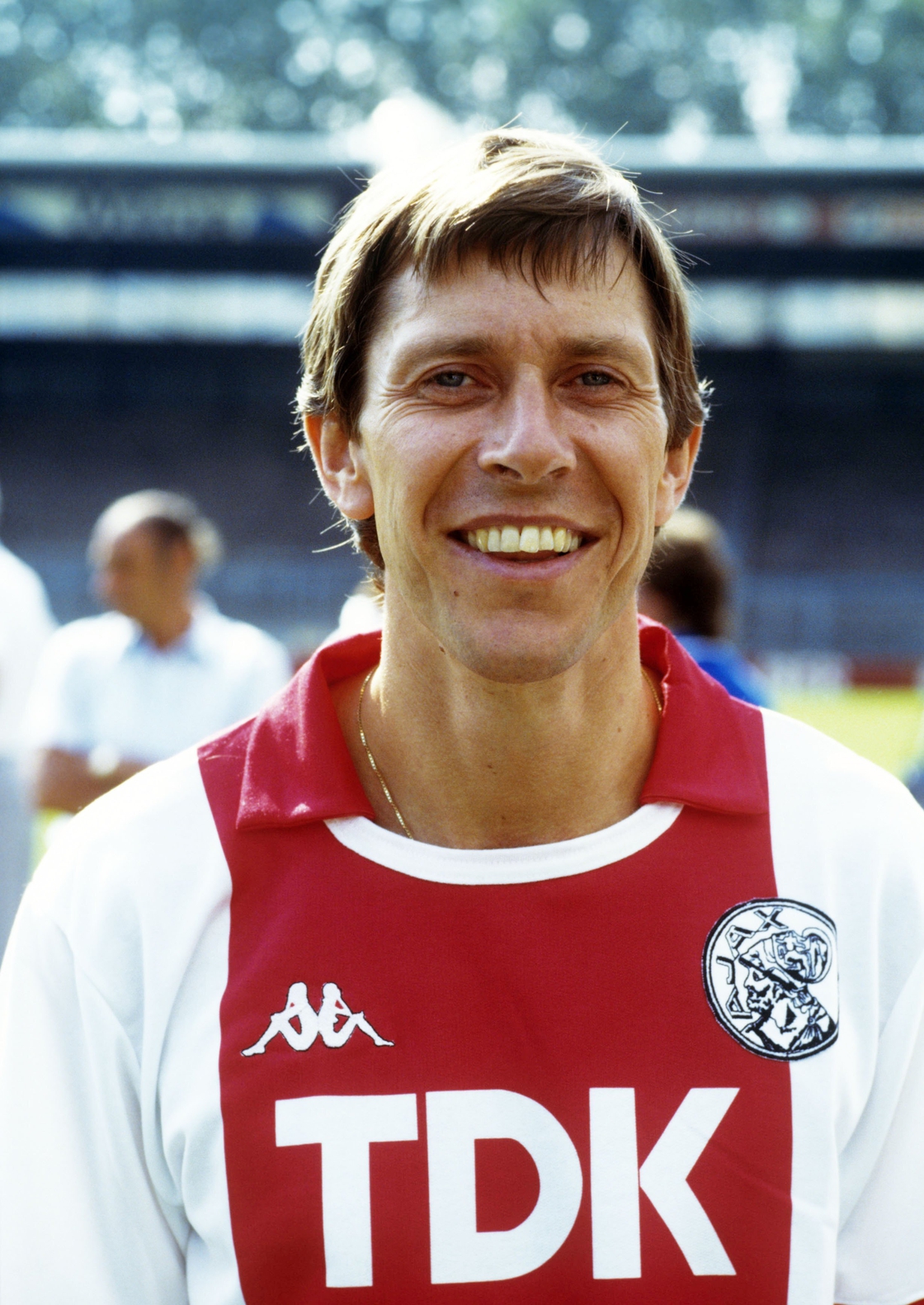 Cruyff was also at the start of what would turn out to be an outstanding and influential coaching and management career and had just guided his hometown club to two cups and the UEFA Cup Winners Cup in his first two seasons in charge.

As has been well documented, Cruyff is synonymous with Total Football as a player and coach, with his influence rubbing off on the likes of Pep Guardiola among many others.

The interchange of movement and positions is a hallmark but also the intensity of the pressing and workrate that Cruyff demanded which differed to the alternative form of intensity in England.

Tactics that didn't feature the front two partnerships he had been used to were another challenge.

"When I watch football today, it's got Cruyff written all over it, the way teams play," says Stapleton.

"When I went to Ajax, the difficulty for me was that it was a slow game but it was a possession game, pass the ball across the middle and work the ball up the field, playing with one forward and then what you would class as a No 10 these days, playing in behind as the player with the free role and two wide players. 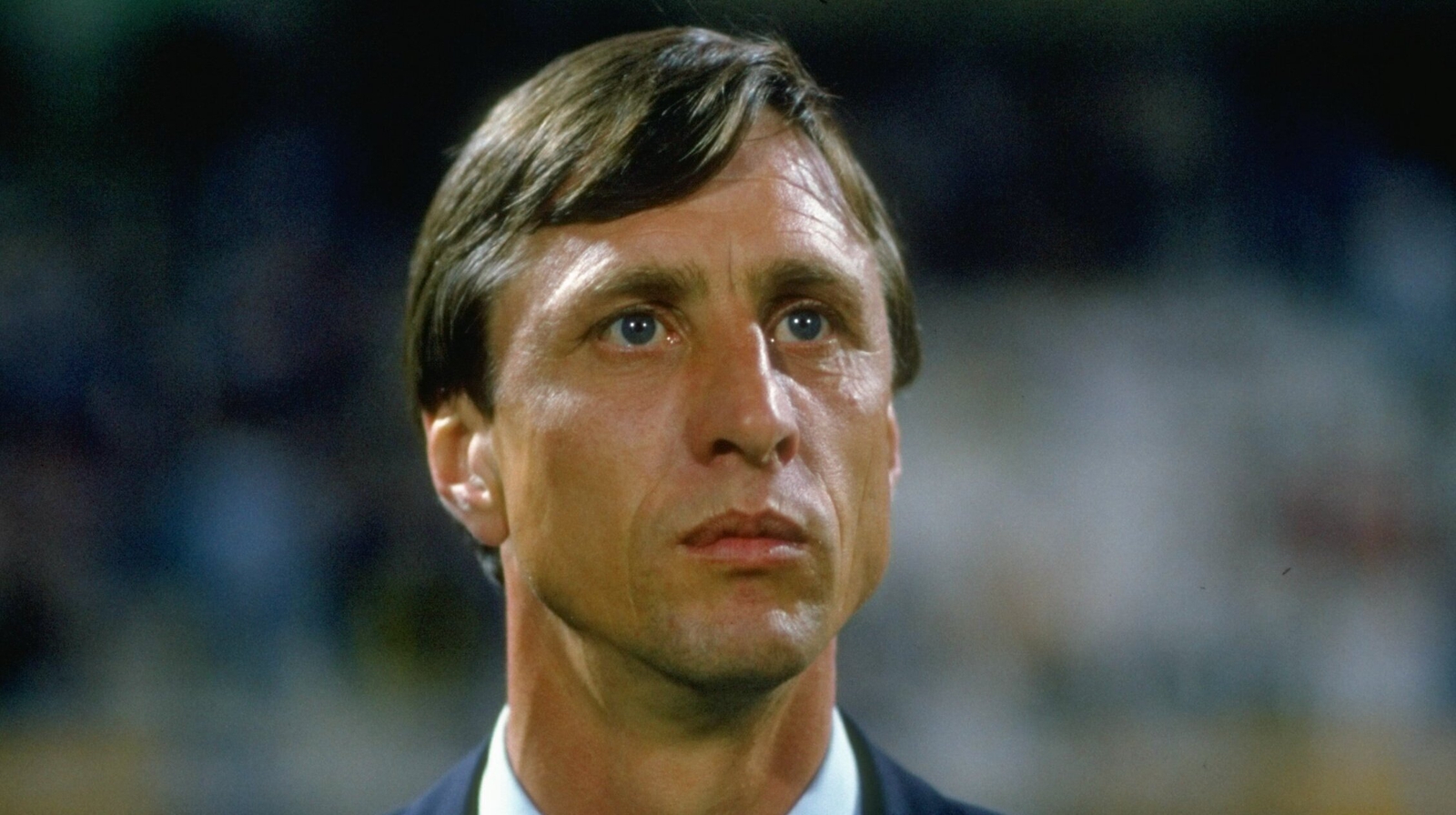 "That was Johann Cruyff's own way of playing and whilst it was difficult for me, that's the way teams are playing now and it was the way forward at that time, in 1987."

As fate would have it, international call-ups aside, Stapleton would have another reason to make it back home to Ireland.

The 1987-88 first round of the European Cup Winners Cup had seen holders Ajax drawn against Dundalk, who had finished runners-up in the 1987 FAI Cup final but to a Shamrock Rovers side who were to play in the European Cup because they had also won the League of Ireland.

Stapleton was still getting to grips with early life at Ajax when the first leg in the club's old Olympic Stadium came round on 1 September.

But the manager did not bow to sentiment when it came to the Ireland captain, with Cruyff not including him in the starting line-up. But a Dundalk side which would make up for the pain of '87 with a memorable double-winning campaign by the end of the season gave a great account of themselves, forcing the Dutch side to shuffle the pack.

"I was on the bench, I didn't start," says Stapleton.

"At half-time, the score was 0-0 and Cruyff said, 'Right, you're going to play'. He had this in his head. He said, '[Dundalk] know you're a player from Ireland, they respect you and maybe we can use that to our advantage'.

"So I played the second half and we won 4-0, so it was one of those things that managers think should work or might work. But Dundalk were being very tough to break down going in at half-time, and I think at that time, they were still part-timers, so that wouldn't have gone down very well [with Ajax]. I ended up playing in that second half and scoring."

That goal came courtesy of a player who was definitely full-time. The legendary Frank Rijkaard, who would go on to win Euro 88 with the Netherlands at the end of that season, had opened the scoring on 65 minutes, albeit with a fortunate deflected effort, before fellow Dutch internationals Danny Blind (future Netherlands manager and father of Daley) and Aron Winter put more daylight between Ajax and Dundalk. 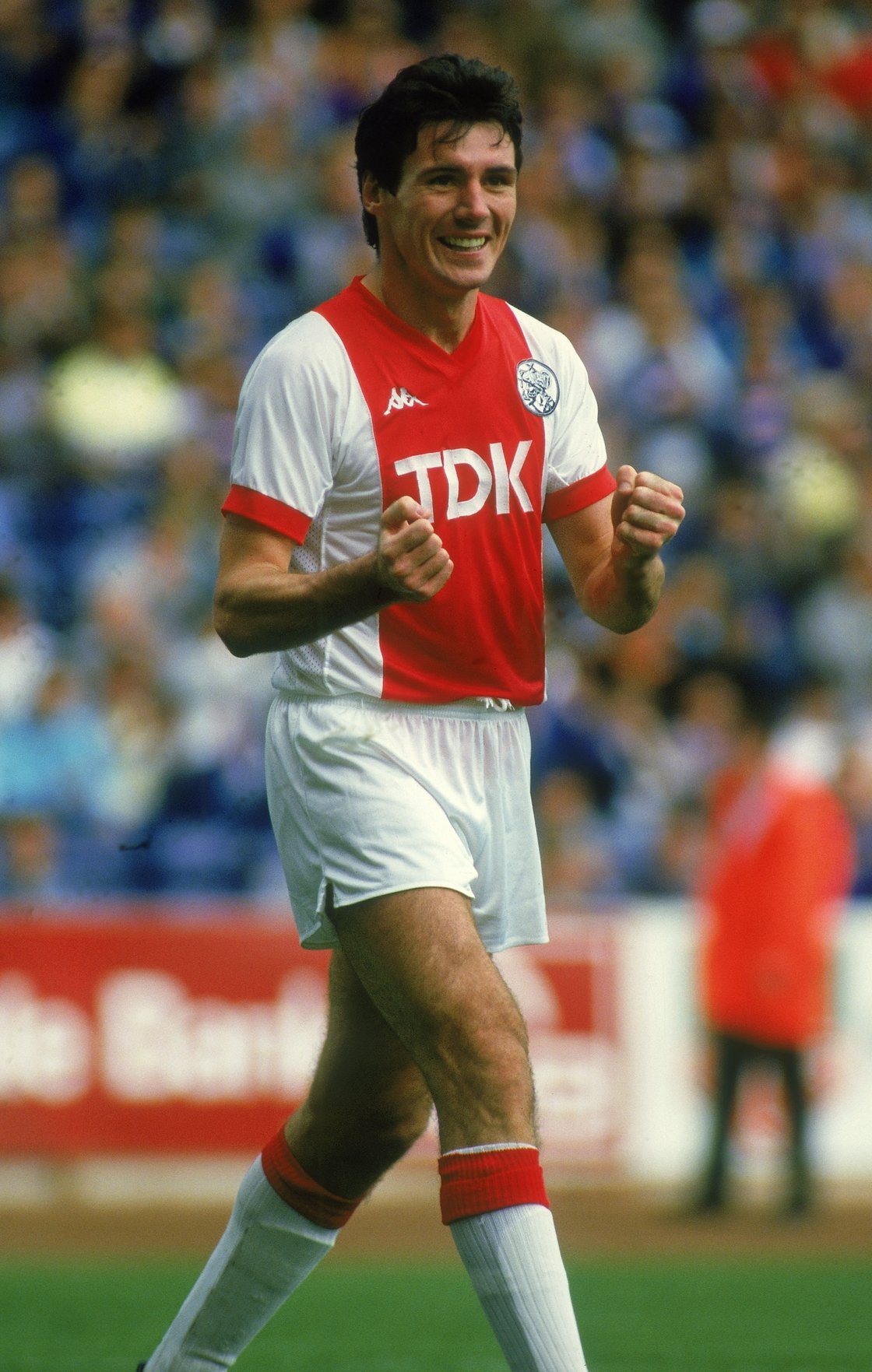 Finally, with five minutes to go, Rijkaard embarked on a powerful run through the Dundalk ranks before pulling the ball back from the inside right for Stapleton to apply a deft finish to complete the scoring. Ultimately, it would be his only goal in an Ajax shirt.

He would get to start the second leg at Oriel Park a fortnight later but by then had already got to spend time with his opponents following the first leg.

"Funnily enough, I was still in the hotel then where the guys were staying, so I was with the Dundalk lads after the match," he says.

Those two games against Dundalk, coupled with five games in the Eredivisie were his only appearances for the Dutch record champions, with Stapleton returning to England in January 1988 to sign with Derby County, although he would later go abroad again briefly to play in France with Le Havre months later.

But at Ajax, his arrival had coincided with the growth of a mercurial young striker who would go on to share Arsenal legend status. Dennis Bergkamp needs little introduction and Stapleton got an early glimpse at his development. Dennis Bergkamp of Ajax (R) during the Europa Cup 2 final against 1. Lokomotive Leipzig on May 13, 1

"Dennis was playing at that time because I wasn't reguarly in the first-team," he says.

"At the beginning, I was still going through adjustment but then I played a lot with Dennis and he used to play on the wing. He didn't play as a centre-forward.

"He played right-wing and he was reserve to a lad called John van 't Schip, who was first choice and in the national team. He played down that right wing and Dennis used to come in.

"Cruyff used to change the team all the time and he would play Dennis sometimes. I trained and played a lot with him."

Some of the fondest memories however are off the pitch as he appreciated what the Netherlands had to offer, enjoying the peace and quiet on the outskirts of Amsterdam.

"We lived out of town, not in the city," he recalls.

"We lived out of town in the suburbs and obviously there were a lot of dykes and waterways very close by and we were in almost like a village.

"But it was a nice place and it was very quiet and different obviously. Different culture to living in England so we kind of had to make adjustments for that." 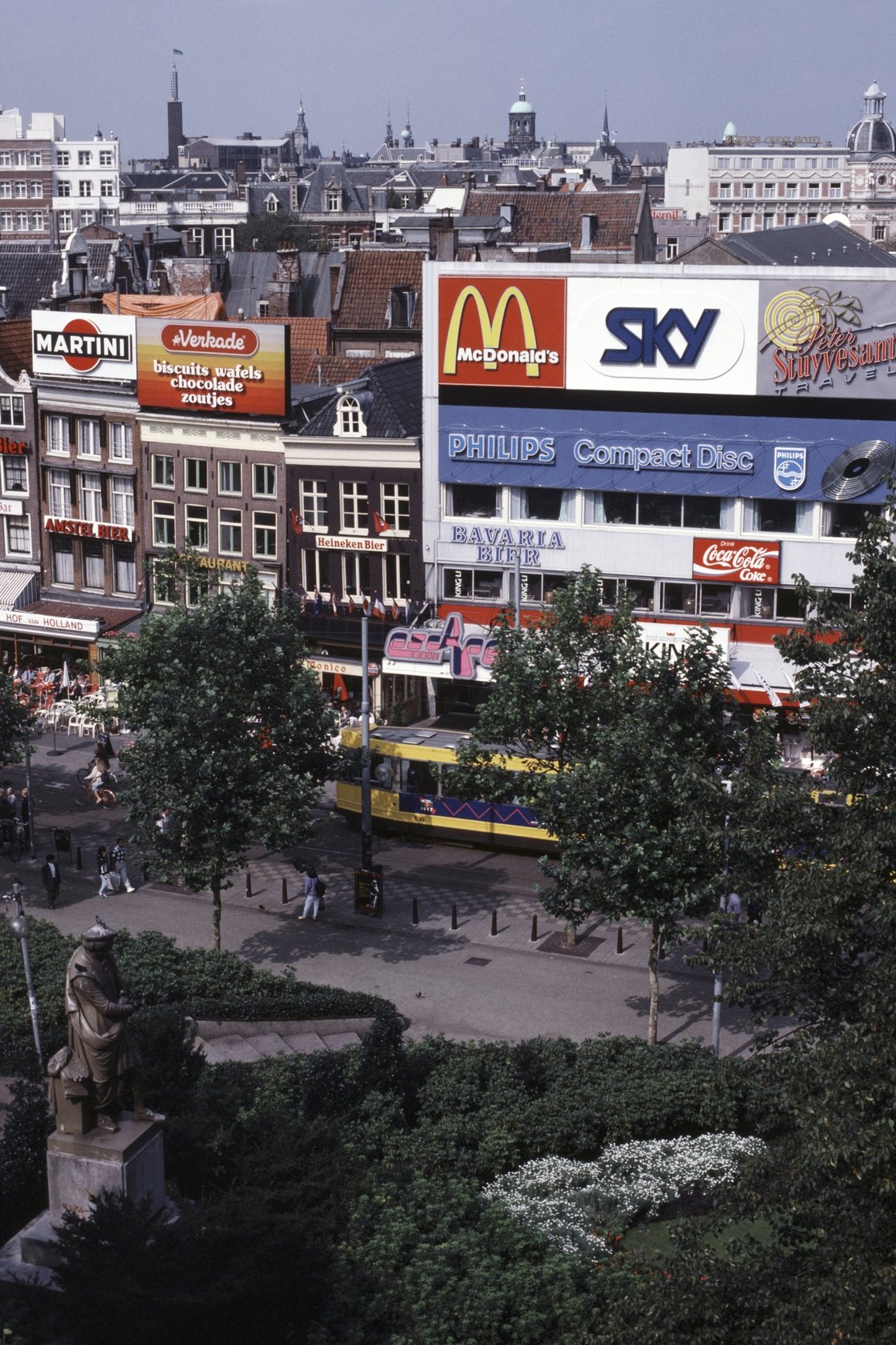