Champions League holders Liverpool saw their defence come to a shocking and shuddering halt as Atletico Madrid progressed to the quarter-finals 4-2 on aggregate, after recording a 3-2 second-leg victory after extra-time at Anfield.

Georginio Wijnaldum levelled the tie with a header just before the interval and Liverpool seized the advantage through Roberto Firmino in extra-time.

Goals from Marcos Llorente may be as rare as hen's teeth, but he struck twice to rock the home crowd before Alvaro Morata sealed the deal as Liverpool's hitherto superb season hit a new nadir.

In a tale of two goalkeepers, the La Liga side's Jan Oblak showed why he is one of the world's best by single-handedly holding the visitors at bay in the second half as shots rained down on his goal with the tie level on aggregate.

By contrast Adrian, the goalkeeper who did not have a club in the summer and who was standing in for the injured Alisson Becker, had a shocking nine minutes in extra-time with his error leading to Llorente's goal after Firmino's first at Anfield since April had put Liverpool ahead in the tie for the first time.

The Spaniard then seemed slow to react to Alonso's long-range effort, which left Jurgen Klopp's side needing two goals in the final 15 minutes.

For once Anfield could not deliver one of its famous comebacks as Klopp lost his first two-legged tie as Liverpool manager at the 11th attempt, with Morata adding a third in the 120th minute. 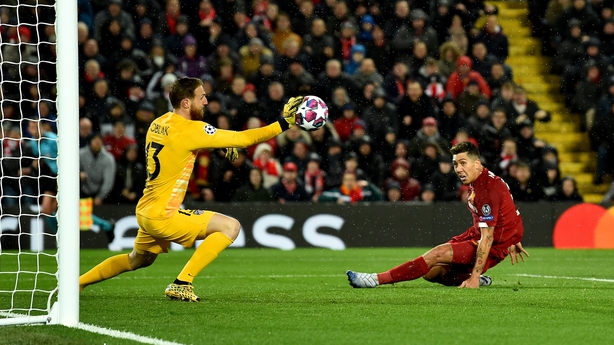 In truth it should never have got that far and would not have one had it not been for Oblak.

After Diego Costa fired into the side-netting after just 14 seconds the direction of travel was mainly towards the visitors' goal, although Simeone's side did enjoy a spell of possession midway through the half which succeeded in quelling the crowd.

It succeeded in stunting the Reds' momentum which had been growing with Oblak saving from Wijnaldum, Oxlade-Chamberlain, Mane and Alexander-Arnold as the return from injury of captain Jordan Henderson immediately made Liverpool look a different side.

Atletico offered one more threat, Angel Correa heading wide from a corner, before the gamesmanship broke out, with players crowding referee Danny Makkelie in an attempt to get Alexander-Arnold booked and Simeone looking to get in the ear of the fourth official at every opportunity.

But the tension was building, with Liverpool's right side their most profitable avenue of attack as Oxlade-Chamberlain drove forward and Alexander-Arnold, given plenty of time and space to whip in cross after cross, stood out.

So it was no surprise when one of that pair, Oxlade-Chamberlain, produced a brilliant cross on the run from the byline for Wijnaldum to head down and away from Oblak a minute before the break.

It was his fourth goal in nine Champions League appearances - which included two in May's famous 4-0 comeback against Barcelona - having scored three in 33 in the Premier League during that time.

The Atletico goalkeeper was back in employment in the second half saving a weak shot from Mohamed Salah, cutting in on his left foot, close-range strikes from Mane and Roberto Firmino and one further out from Oxlade-Chamberlain.

Costa was replaced by Llorente after failing to test Adrian or do the other part of his game and annoy his opponents, and the best connection he had all night was when he booted a rack of water bottles in frustration on his way to the bench.

But while Oblak was giving a commanding performance in front of the Kop, Adrian was less convincing after being fortunate to escape after parrying Joao Felix's shot into the path of Correa.

Seeing that fragility prompted Saul Niguez to attempt to lob the Liverpool goalkeeper from well inside his own half, but the ball drifted wide.

Robertson's header against the crossbar reestablished the natural order, with Alexander-Arnold's inswinging corner almost palmed into his own net by the otherwise impeccable Oblak, who then denied Alexander-Arnold and Wijnaldum as the saves kept coming.

Liverpool resorted to the spectacular in an attempt to beat the Slovenian, with Mane's two overhead kicks and Salah's cut-inside-and-shot all off target.

Niguez's header was the last touch of regulation time, and although the ball hit the back of the net, he was offside.

Four minutes into extra-time Firmino, poor all game by his standards, enjoyed a huge stroke of luck as his header from a cross by Wijnaldum, who by contrast got better as time went on, hit a post but rebounded straight back for him to sidefoot inside the opposite upright.

However, a duffed kick from Adrian straight to Joao Felix led to Llorente's first and the substitute found the same corner from a counter-attack just before the interval and Liverpool, uncharacteristically, went out with a whimper.