Fresh from their crucial 1-0 Euro 2021 qualifying victory over Greece comes another 'must-win' match for Vera Pauw's Republic of Ireland as they travel to Montenegro for a game they dare not lose.

Ireland battled their way to a narrow win over qualification rivals Greece in Tallaght as a Diane Caldwell goal proved to be the difference against the physical and defensively resolute visitors.

That result means that victory in Montenegro would see Ireland move one point clear of Germany in Group I with just three games remaining, although the top seeds remain favourites to top the table as they play Ireland twice at the end of the campaign.

Given Germany’s dominance in the group - they have won all four of their games, scoring 31 goals without conceding - second place is the reasonable target for Pauw’s side.

Finishing second in the group will guarantee Ireland a play-off spot and could conceivably still see them take an automatic qualifying place, although that would be dependent on how other groups finish, with the three best runners up avoiding the play-off route.

Regardless, Ireland have travelled to Montenegro aware that anything other than a win would represent a blow to their qualification hopes and could re-open the door for Greece.

Pauw certainly isn’t willing to consider the possibility of Ireland dropping points and speaking to RTÉ Sport, she insisted her side go into the game full of confidence after that win over Greece.

"We are very happy because the most difficult games are behind us, those two against Greece," she said.

"The Montenegro game we have to win and normally we would but we have to be very, very concentrated and ready for it to be able to win it. Then it’s up to Ukraine and what they do, whether we have to get a draw in Ukraine."

The Ireland manager expects a defensive display from the hosts who have yet to find the net in qualifying and she warned that her players may have to be patient in order to break down Montenegro.

"The biggest challenge will be if we can break their wall because we are better, much better than they are. It shouldn’t be one of those games where you are constantly attacking but the ball doesn’t go in.

"We will bring a lot of variety so that we do not become predictable in our game and if we are not predictable, we will definitely create chances and we will score.

"With a win on Wednesday, we’re really ahead and then the Ukraine has to catch up with us and then we will see in the away game with Ukraine who is the strongest and who will go to the play-offs."

While that game with Ukraine may yet be decisive as Pauw suggests, Ireland can't afford to look past Wednesday's challenge.

It was against Montenegro that Ireland opened their qualifying campaign and they laboured to a 2-0 win just four days after Germany had hammered them 10-0.

Tyler Toland opened the scoring for Ireland after just seven minutes in that game in Tallaght back in September, but the home team were left frustrated for large parts as they were unable to turn their dominance in possession into goals.

It took a second-half penalty from Katie McCabe to make sure of the points and the doggedly defensive nature of that display has given Montenegro manager Mirko Maric reason to hope that his side can cause an upset on home soil.

"The Republic of Ireland plays very aggressive football, with many duels and a lot of skipping long ball games. In addition, dead-balls are probably their biggest trump card," Maric said.

"The match we played in Ireland gives us the right to hope that we can offer resistance to a very strong team. We'll see if we can make something happen."

Pauw will certainly hope to see a more clinical display from her side to that of the first match even if the front line will have a familiar look to it.

The Irish boss is unlikely to make too many changes from the victory over Greece, with Rianna Jarrett set to lead the line with Ruesha Littlejohn behind her and with Katie McCabe down the left.

Pauw will again look to the impressive Denise O'Sullivan to run the show in midfield and she'll be tasked with threading the ball through what looks likely being a very packed defence.

There will be one enforced change as Heather Payne, who started against the Greeks, is sidelined with a hamstring issue she picked up in that game.

Emily Whelan is promoted from the Under-19s to replace Payne while there is one other change to the squad with Stephanie Roche returning to replace Chloe Mustaki who suffered a knee injury.

Roche is back in the Irish fold after her stint with Italian side Florentia came to an end and she made her return to Peamount.

Injuries have curtailed the Puskas award runner-up's game time of late and she'll likely have to settle for a place on the bench in Montenegro.

However even if she's not at full fitness there are few better players to be able to call upon if you need a goal and Pauw will be more than aware that the last time Roche faced Montengro - back in 2016 - she scored a hat-trick in a 9-0 win.

More of a same on Wednesday please. 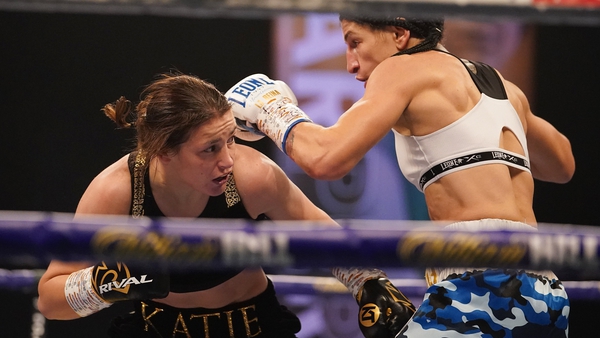