Pablo Mari may have only played twice for Arsenal but the Flamengo loanee is planning on staying at the Emirates Stadium for years to come.

The 26-year-old defender made the temporary switch to the Gunners in January following a successful stint in Brazilian football.

Mari lifted the league title and Copa Libertadores with Flamengo, having only joined from Manchester City last July.

He helped Arsenal to victories over Portsmouth and West Ham, keeping clean sheets in both games, as he starts his time in north London with optimism.

Arsenal have an option to sign Mari on a permanent basis in the summer and there is no doubt where the player sees his long-term future.

Asked if he was keen to stay beyond his loan, Mari replied: "Yes, of course.

"I am so happy here. I am going to try and do my best until the end of the season.

"I hope also the club is happy with me and then we are going to find a good end (of the season) for everybody.

"I want to play a lot of years here with Arsenal. It is another situation and I am really happy now."

Mari may have only made a couple of appearances for Arsenal but that is two more first-team games than he managed during a three-year stay at Manchester City. 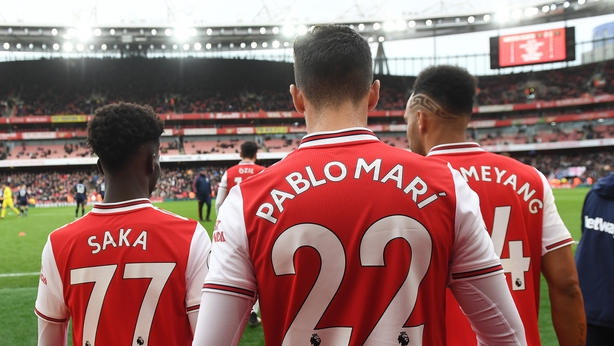 The Spaniard will be hoping to retain his place in Mikel Arteta's defence as both sides prepare to go back to the Etihad Stadium for their rearranged Premier League game on Wednesday night.

It is proof of how far down the pecking order Mari was at City that he did not actually meet Arteta, who was assistant manager at the time, until he walked through the door at Arsenal in January.

"In that time, for me in my mind, I wanted to play with them," he added.

"This was not possible. So now for me it is another situation. I want to play in one of the best leagues in the world and I am now here.

"It is going to be a nice game, but I am really focused here now with Arsenal. I want to win that game.

"It is one more game for us, another three points and we want to try to win. I've learned a lot because when I was there I was young, now I am little bit older. I learned a lot in all the teams I have played."

Asked if knowing Arteta was helpful in settling in at Arsenal, Mari revealed: "I didn't meet him there. So this is my first time with him.

"But everybody knows he is a really good coach. He tries to speak with me a lot and I try to learn a lot with him. I think it is going to be good together."

Arteta is now pleased to be working with Mari, who was loaned out to Girona, NAC Breda and Deportivo La Coruna during his time at City.

"He is doing well, he's adapted really well," he said after Saturday's 1-0 win over West Ham.

"It is not an easy league and a central defender, in my opinion, to play in the Premier League is one of the toughest positions to play for any foreign player.

"But he is very willing, he is learning and he has a good experience and understanding with his team-mates."