Kent had struggled to make his mark as much as anyone in the Gers team in Dingwall but he was rewarded for a positive piece of play in the 77th minute to earn his side a 1-0 Ladbrokes Premiership victory.

County had forced some good chances following an uneventful first half but Rangers improved after the introduction of Florian Kamberi.

The victory provided some much-needed respite for manager Steven Gerrard after consecutive defeats by Hearts and Hamilton saw them crash out of the William Hill Scottish Cup and fall 13 points behind Premiership leaders Celtic.

Gerrard admitted his team was "shot of confidence" after their midweek defeat by Accies and the win was a welcome boost ahead of a tough week in which they will face Bayer Leverkusen and Celtic.

Rangers were missing James Tavernier, Ryan Jack and Jermain Defoe through injury with Matt Polster coming in at right-back and Kent replacing Kamberi in the starting line-up.

Glen Kamara had a shot pushed away as Rangers started on the front foot but they quickly lost momentum and County forced several attacking set-pieces without making anything from them.

Ross Laidlaw made a double stop from Kent and Alfredo Morelos in the 16th minute but the only other time he was called into action before the break was to make a comfortable save from a long-range strike from Steven Davis. 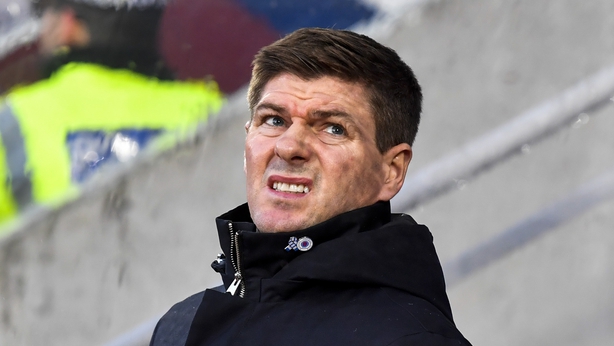 Rangers lacked urgency and the likes of Joe Aribo and Kent were struggling to get on the ball.

When Davis did let Kent inside the right-back, the former Liverpool player overran the ball and allowed Laidlaw to gather.

Kent continued in the same vein straight after the interval - he hit the first defender with a cross, gave the ball away and was caught offside in a promising break.

County sensed there was more in the game for them and Billy McKay was foiled by Allan McGregor's foot after Don Cowie dispossessed Aribo on the edge of the Rangers box.

More home chances followed. Ross Stewart, making his first start of 2020 after injury, snatched at a good opportunity following a break from Josh Mullin, who soon waltzed through the heart of the Gers team and fired a shot which McGregor pushed over.

Gerrard made his first change in the 63rd minute, bringing on Kamberi for Ianis Hagi, who had looked the liveliest player in the Gers midfield and had forced a decent second-half save with a drilled effort from 20 yards.

Kamberi injected some directness to Rangers' play and he had a shot diverted wide before the visitors threatened from the resulting corner, Iain Vigurs heading the ball away from Morelos on the line after Aribo had headed towards the far post.

More good defending stopped George Edmondson's header testing Laidlaw but the pressure paid off. Kamberi spread the ball out to Kent on the right wing and he cut inside and fired a 20-yard shot which bounced into the far corner off Richard Foster.

Cowie had a half-chance to level but shot weakly at McGregor and Morelos was foiled by a goal-line clearance in stoppage-time.