Jose Mourinho delivered a withering critique of Tottenham's record signing Tanguy Ndombele after a dire first-half showing from his side in the 1-1 draw at Burnley.

Ndombele joined Spurs from Lyon in a deal that could eventually be worth €70million but the midfielder has failed to establish himself in his first season with the north Londoners.

He was handed only his third Premier League start this year but attracted Mourinho's ire after Tottenham were thoroughly outplayed in the opening 45 minutes by Burnley, who had gone ahead early on through Chris Wood.

Ndombele was hooked at half-time alongside fellow midfielder Oliver Skipp but Mourinho absolved the teenager of any blame, instead criticising the Frenchman before demanding more of a return from him.

Asked what prompted him to introduce Giovani Lo Celso and Lucas Moura at the break, Mourinho replied: "My thinking was in the first half we didn't have a midfield, it's as simple as that.

"More important than tactics is to have midfield players that want the ball, who connect the game, who press, who recover the ball, win duels and we didn't have it. I'm not critical with Skipp at all.

"I'm not going to run away and I have to say that Tanguy has had enough time to come to a different level.

"But a player with his potential, with his responsibility, I think he has to give us more than he is giving us." 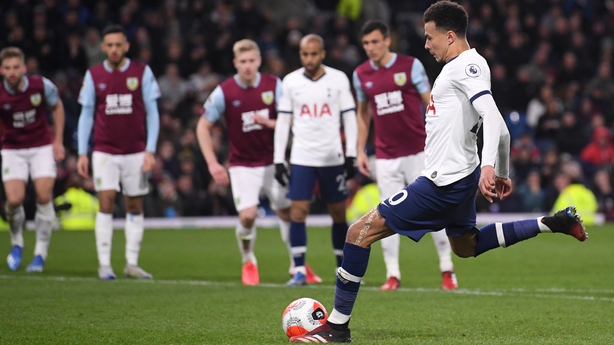 The introduction of Lo Celso proved a masterstroke as the midfielder pick-pocketed Jay Rodriguez before laying off for Erik Lamela, who went over the trailing leg of Ben Mee inside the area.

Dier, as anticipated, started despite the furore which saw him climb into the stands to confront a fan in the aftermath of Tottenham going out of the FA Cup to Norwich on Wednesday.

He was subjected to some taunts from the home end but Mourinho was pleased with how the England international handled himself.

Mourinho added: "You could see that his performance was really solid again and completely under emotional control.

"He played well at centre-back and played very well in midfield so I'm very happy with Eric, of course."