Back to back games against the Greeks and Ireland manager Vera Pauw is quite happy to see the back of the "compact" Mediterranean side.

Just one goal separated the sides over the two games with Ireland coming out on top in the return game in Tallaght Stadium last night, securing a narrow 1-0 victory.

The first game between the two teams ended in a 1-1 draw last November when Greece grabbed a late, late equaliser to end Ireland's 100 per cent start to the campaign in their quest to qualify for Euro 2021.

But while Pauw’s side dropped two points in Greece, they came away from the game in Dublin with all three thanks to Diane Caldwell’s first-half strike, as Ireland maintained their unbeaten opening to the campaign.

In fact, the qualification process has already reached the halfway stage with an impressive ten-point return for the Irish from their four games played.

More importantly perhaps, is the gap that has opened up between Ireland and the rest of the group as the Girls in Green are now six points clear of Greece in third place and ten ahead of both Montenegro and Ukraine who have yet to take a point. 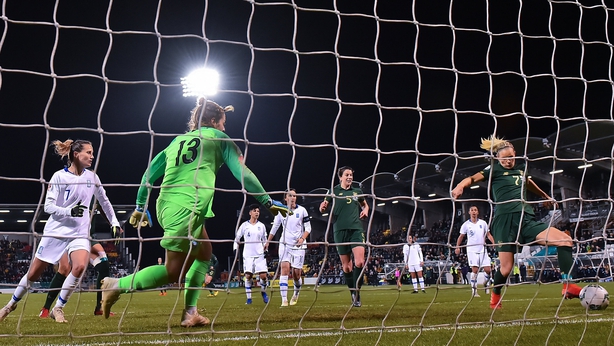 In truth, Ireland were by far the better team against the Greeks, as was the case in the first game, but evidently, the team struggled to put them away on both occasions and got the win last night thanks a solid all-round performance while keeping a clean sheet.

"It was a battle, again," said Pauw, speaking to RTÉ Sport after the game.

"We know the Greeks, they are so difficult to play against, they were always compact.

"The good thing is that we have left Greece behind us, and that is a very, very good thing."

The Ireland manager was obviously delighted to secure the win that maintains the momentum in the group, but she admitted after the game, that her side should have put the result beyond doubt.

Ireland were caught out in injury time in Greece when the home side grabbed that late equaliser, and as the game entered the latter stages in Tallaght, there was a real prospect of the same happening again, most notably when the board went up at the end to signal five additional minutes.

"We should have scored more," said Pauw. "It was like 'not again' late on, it was also tight here against Ukraine in the last few minutes so we need to score more goals, that's what it is, we are working on that.

"I am so happy with the three points as it turned out to be the same kind of game as the away game.

"But if you are a better team and you are only a few days together, after four months, then teamwork in the last phase is the most difficult," explained the manager.

"We could build up to a certain level but in the last phase it was just too early or too late, and that is teamwork that grows by playing together." 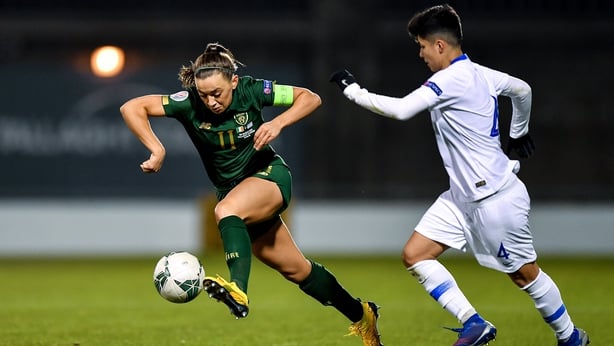 Pauw was full of praise for her side and has evidently garnered the full support and trust of her squad in a very short space of time since taking over in September.

So when asked was she relieved to secure the win, considering the late leveller in Greece, she pondered the question carefully before answering.

"It's not relief, I am too proud of this team to call it relief," said Pauw.

"It's been a battle and we deserved to win but maybe it's relief that we got through the last few minutes."

Looking ahead to the rest of the campaign, Ireland have the opportunity to go top of Group I as they travel to the continent to take on Montenegro on Wednesday.

A victory would put Ireland one point clear of group favourites, Germany, nine ahead of Greece and 13 clear of Ukraine, which would make them favourites to finish no worse than second in the group.

Three automatic places are available for the best overall second place finishers, and on current form, Pauw’s side may not even need a play-off to secure save passage to England for next summer’s tournament.

"I don't see Ukraine taking all the points but we need to see. It's a very difficult team to play against," said Pauw.

But first Montenegro, and a win on Wednesday would take a lot of the pressure off the Irish side for the two tough clashes coming up against Germany in April and in the final round of the qualifying process in September.

"We will see how that goes," said an upbeat Pauw.