Ireland maintained their unbeaten start to their Euro 2021 qualifying campaign with a comfortable 1-0 victory over Greece at Tallaght Stadium.

Vera Pauw's side remain in second spot in Group I following the win, which came courtesy of a first-half goal from Diane Caldwell.

It was a comprehensive, if slender, victory for the Girls in Green who will now head off to Montenegro next week as they continue their quest to qualify for next year’s tournament.

Ireland looked confident and composed from the start, taking control of possession in the early stages in front of a healthy crowd of 4,511 who turned up on a cold, clear night at the foot of the Dublin mountains.

However, the visitors were not unduly troubled in those opening exchanges and were quite happy to venture forward on occasion.

The game took a few minutes to get going but the first real chance fell to the home side after nine minutes, when Heather Payne was played in down the right.

A whipped ball across the face followed and while Brighton striker Rianna Jarrett read it well, she was just unable to connect at the near post.

Two minutes later, Aine O'Gorman pushed on from her left back position and clipped a delightful ball over the top to Jarrett who raced clear down the left wing.

A clever ball was pulled back towards the penalty spot, and while Payne was unable to connect, slashing at her effort, Denise O’Sullivan arrived to crash a fine shot on target. 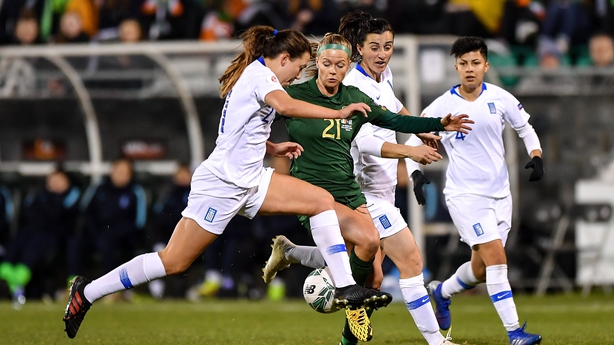 Credit to keeper Anthi Papakonstantinou who got two strong hands to the shot and parried it away to safety.

Moments later, Ireland were again on the attack, and once more it was Jarrett who created the danger, pulling wide to the right flank on this occasion.

The ball arrived at the feet of the lively O’Sullivan but this time the Corkonian was unable to get a shot on target.

Ireland really began to dominate after a quarter of an hour with the ever-present O’Sullivan pulling the strings in the middle of the park.

Ruesha Littlejohn was sent off on a mazy run through the middle of the park and while the shot looked on, she opted to feed captain McCabe, arriving on her left shoulder, however, the ball got caught up in her feet and the danger was cleared.

On her 75th appearance, Diane Caldwell has the hosts in front at Tallaght Stadium #COYGIG #RTEsoccer #IRLGRE pic.twitter.com/HM6F9ljJkp

Greece finally threatened in the Irish box as a looping corner was sent in from the right flank after 21 minutes.

A moment of panic followed as Marie Hourihan flapped at the dropping ball but thankfully for the home side, it was marshalled clear by the swarming green jerseys.

In fact, that Greece attack almost led to an Irish chance as O’Sullivan raced clear and deep into the opposition half, before feeding Payne. But the visitors got numbers back quickly behind the ball and thwarted the attack.

The home side continued to dominate with some patient build-up play but in truth, were unable to create anything of note to trouble the Greece keeper as the game pushed towards half time.

It took a set-piece for the home side to break the deadlock, and it was crafted in north London as McCabe smashed a long looping ball towards club teammate Louise Quinn.

Unmarkable in the aerial contest throughout the opening '45, Quinn won the header with ease and guided the ball across the face of the goal, leaving centre-half partner Diane Caldwell the easiest of tasks to tap the ball home.

The perfect tonic for the home side, finally making their possession count just moments ahead of the half-time whistle.

Ireland went straight on the attack in the second half, looking to pick up where they left off, and once more they found joy on the flank with Jarrett running the channels.

Cutting in from the left, a fine clipped effort was directed towards the arriving Payne at the back post but she had to stretch to connect and could not help the ball back on target.

Littlejohn was next to threaten as she created something out of nothing coming in off the right flank before smashing a shot on target from close range.

The keeper stood tall and parried the ball clear, but a mix-up in defence allowed the West Ham midfielder a second bite at the cherry, but this time she slammed her left-footed effort wide of the far post.

Substitutions caused a lull in play as both sides made changes, Ireland’s was forced as Payne had to be helped off with a leg injury – Julie Russell came on in her place – while the visitors threw two new players into the action looking to get back into the game.

A noticeable attacking ploy, as Thomai Vardali, only moments on the pitch in the 66th minute, made space for a shot but her well-hit effort flew wide.

Into the final 20 minutes, and Ireland kept up the pressure as they attempted to kill the game off, perhaps memories of the away leg still fresh in the mind.

And Pauw sent on Amber Barrett for the final stages, replacing the hard-working Jarrett, who put in a fine shift in the green jersey, leading the line up front.

The best chance of the second half fell to Littlejohn in the 74th minute after she was played in down the left by O’Sullivan.

The attacking midfielder did well to clip the ball past the covering defender, before cutting inside another to set up a chance at goal.

Littlejohn let fly with the right foot but watched her effort fly inches over the bar.

Greece then almost shocked the home side on a rare foray forward as substitute Veatriki Sarri sent a hopeful curling effort goalwards.

The ball was curling in towards the far post and with the keeper beaten, it looked as if the visitors were about to draw level.

But it was not to be, as the ball failed to come back in enough and it sailed just wide.

With just three minutes remaining, Barrett looked to seal the win as she took aim from outside the box. Her curling effort had the keeper scrambling but the ball flew wide of the far post.

Five minutes of injury time had to be negotiated but lightning would not strike twice, as this time Ireland held on to see the game through to the final whistle and secure the valuable three points.