Nir Bitton claims everyone wanted Celtic to "fail" before they recovered from their Old Firm defeat to storm clear of Rangers at the top of the Ladbrokes Premiership.

The Light Blues' 2-1 win at Celtic Park on 29 December took Steven Gerrard's side to within two points of the champions at the top of the Premiership with a game in hand, with a promise of a tense title battle to come.

However, Rangers' surge failed to materialise and Celtic have motored away at the start of 2020 and - despite dropping their first points of the year with a 2-2 draw at Livingston on Wednesday - they extended their lead over Rangers to 13 points having played a game more, after the Gers lost 1-0 at home to Hamilton.

"It's football. Liverpool are 22 points clear in Premier League so nobody expected that," said the 28-year-old Israel international.

"I mean, it's a good advantage for us but we created it, we made it happen.

"I think after the Old Firm game before the winter break everyone killed us, everyone wanted us to fail. 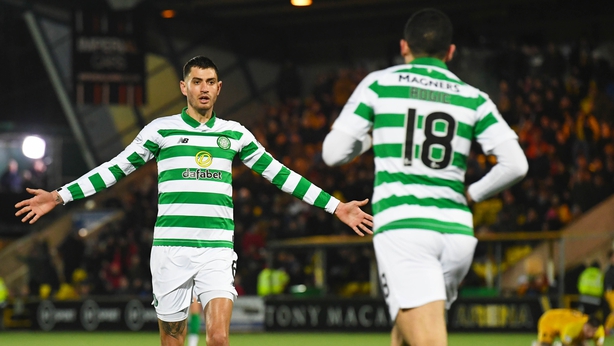 "We were very disappointed to drop points on Wednesday night. We gave away two goals that put us under pressure for no reason.

"We need to cut it from the next games and need to make sure that we win the league as soon as possible. We were 12 points ahead before so one more point, it's OK. It's a long way to go.

"Still nine games, and 27 points is enough points to try and close the gap. We need to make sure it's not going to happen.

"We need to make sure we remain focused, remain concentrated and we need to win as many games as we can."

The former Ashdod player, who signed for Celtic in August, 2013, stressed the mindset required at Parkhead as the club close in on the domestic quadruple treble.

"Every away game in the Scottish league is difficult," he said.

"We need to face it, we need to match it and we do it every week and just need to keep going.

"Every game, even if we are down, even if we are up, we play the same style of play. We will always be on the front foot and try to win the game and as I say, it's a special dressing room to be in."