Eagle eyed-viewers may have noticed Norwich hero Tim Krul having a word with Tottenham's Troy Parrott prior to saving his penalty in the Canaries’ FA Cup penalty shootout win on Wednesday night, with the netminder insisting that he toyed with the teenager’s mind to gain an advantage.

Krul ensured that the visitors made it through to the FA Cup quarter-finals, enhancing his reputation as a specialist at penalty shootouts, keeping out efforts from Parrott and Gedson Fernandes, while also seeing Erik Lamela hit the crossbar.

The 31-year-old also made three excellent saves during the preceding 120 minutes.

Footage showed Krul, who was brought on for a shootout for the Netherlands in the 2014 World Cup, with a list of each of Tottenham player's penalty preference stuck to his water bottle.

"For me personally, I look at the player. Who's confident and who's not," Krul told the Pink Un. "The young lad, Parrott, I played a little bit with his head."

However, what Krul actually said to the Republic of Ireland international seems somewhere between innocuous and inane, as he added: "I said, 'I haven't seen many penalties from you when I've done my homework' and he just looked at me."

"This is when you have to forget about everything and just go back to what I know and what I've learnt with my experience from Brazil to wait on the line and react to the shot."

Reflecting on his penalty cheat sheet, the Dutchman explained: "It's hard work, homework. Most of them were right. To be honest, I started mixing up the players a little bit because I thought Gedson was taking two penalties at one stage.

"I prepared before the game with clips and even before the shoot-out I did some homework. The moment was there - Lamela changed his usual side but luckily enough he hit it over the crossbar." 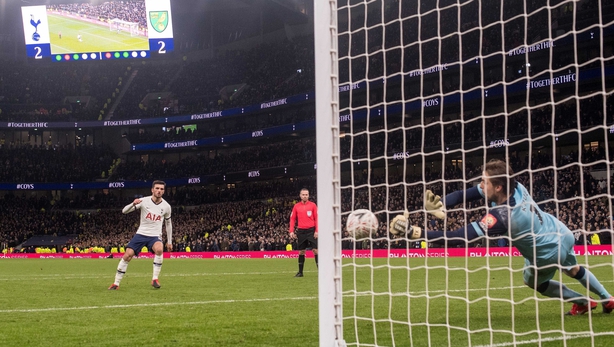 Tottenham coach Jose Mourinho says he will only be able to prioritise one of his side's next two games.

Spurs visit Burnley on Saturday evening in what is a vital match in their bid to reach the Premier League top four, before heading to RB Leipzig needing to overturn a 1-0 deficit to keep their Champions League hopes alive.

They are in the midst of four games in 10 days and are battling an injury crisis that is keeping Harry Kane, Son Heung-min, Moussa Sissoko, Ryan Sessegnon and Hugo Lloris out, while Lamela is unable to train and only fit for the bench.

"In this moment I am really sad for the players and the fans, but I am thinking already about what next and I am really, really worried about playing in two days," Mourinho said.

"Trying to give my boys a chance to go to Leipzig with a maximum of conditions to fight against a fresh team, a team with incredible solutions and options and rotations.

Without depth in the striker division, Mourinho has been flogging Dele Alli, Steven Bergwijn and Lucas Moura and all three had to come off against the Canaries.

"I have to say that Bergwijn, Lucas, Dele, all of them they told me I can't carry on. I'm completely dead," Mourinho added.

"Other players on the pitch they were also in big trouble. For example (Giovani) Lo Celso was in big trouble and was absolutely phenomenal."