Ireland's last competitive action of 2019 involved retrieving the ball from their own net, following an injury-time equaliser in their Euro 2021 qualifier against Greece.

Vera Pauw’s side were on course for their third consecutive victory in their quest to qualify for the England-hosted tournament, following Amber Barrett’s opening goal in the 13th minute – a fine lob from just inside the box.

The Irish continued to dominate the game and spurned several chances to secure the win and take a 100% record into 2020 for the remaining matches of the campaign.

A late lapse, however, allowed the hosts to secure a draw in that November clash in Athens, and now the two sides come face to face once again for the return fixture in Tallaght Stadium this evening.

The fixtures have been kind to Ireland thus far as they started with two facile wins against Montenegro and Ukraine, although they made hard work of the latter, throwing away an early two-goal lead, before finally grabbing a second-half winner in a 3-2 victory.

And they will not face group favourites, Germany, until late in the campaign, playing the leaders twice in their final three games, by which stage, the number one seeds could be all-but qualified.

Second place in the group is a very realistic goal for this Ireland side, and if they can pile up the points against the rest of the group, they will stand a very good chance of securing one of the three automatic places for group runner-ups.

And while 2019 may have finished on a low point, the second half of the year in general proved quite positive for the national side, having replaced Colin Bell with Dutch native Pauw.

Confidence is very evident from the entire squad and the Girls in Green will be looking to start the new year with real intent as they welcome Greece to Tallaght.

The home stadium is becoming a bit of a fortress for the Ireland women’s team, and the locals have come out in their numbers to support the side.

Unfinished business, perhaps, will be the theme tonight as Ireland will look to make amends for that late equaliser in Athens, so expect the side to play with real attacking intent from the off.

A depleted squad battled to that away point in Greece but Ireland should be a lot stronger going into tonight’s game.

Experienced pair Aine O’Gorman and Ruesha Littlejohn are back in the squad, while Harriot Scott and Heather Payne are also involved, having missed the trip to Greece.

Pauw has injury concerns in the squad ahead of the game as she is missing Megan Connolly (shoulder), Jessica Ziu (groin) and Leanne Kiernan (knee). 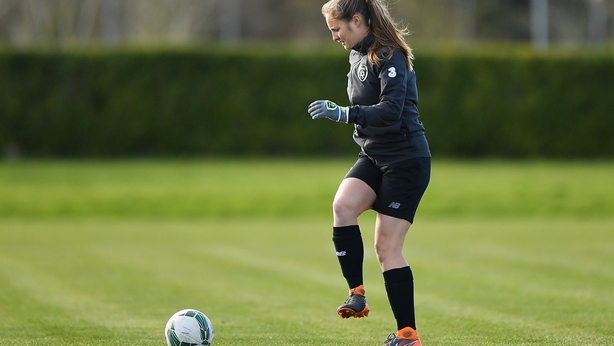 American-born Kyra Carusa has been drafted into the squad and joins a very strong Ireland attacking unit.

The manager believes that her side have better players and better quality than tonight’s opponents, while she conceded that the team’s overall performance in the last match was not at the level she hoped for.

But the squad have been together for a full week ahead of this game – some players joined up later due to club commitments – and Pauw expects all the players to be hitting their levels ahead of kick-off.

"There are players who are playing regularly, players who are on the bench, and players who need to train more, because they don’t have the opportunities in Ireland," said Pauw, talking to RTE Sport yesterday.

"Some players are overloaded, but in these seven days, we can get every player fresh, because we know how to do that. So far, so good.

"Every player had their own programme, so they are all on the same level."

Katie McCabe will again captain the side against the Greeks, and while the Arsenal attacking midfielder is perhaps the most high-profile player in the squad, the manager was quick to point out the quality that exists throughout.

"All the players have their core basic tasks within the squad and Katie is doing very well [at Arsenal].

"Everyone is doing so well at the moment, Denise O’Sullivan, Rianna Jarrett, Diane Campbell, Louise Quinn, Niamh Fahey at Liverpool, so we are really confident."

It is no surprise that there appears to be real emphasis on the attacking unit going into this game, and Pauw must decide who she asks to lead the line, with Amber Barrett and Rianna Jarrett in contention to start – she may work both players into her attack-minded XI.

Ireland have struggled to hit the target in all three games thus far, despite enjoying the lion’s share of possession, and Pauw admitted that the squad have been working on that particular aspect of the game ahead of the Greece clash.

"I’m not into stats," said Pauw, responding to the fact that only 12 of the 43 shots on goal in the three games had been on target.

"The fact is that we get there [creating goalscoring opportunities]. That is the most important thing.

"We’ve been working very much on scoring when you get in that position this week, to get the routine [in that situation]. But this is a concern for every team.

"The video analysis is the most important thing we use."

Pauw has obviously been looking to widen the net as Ireland attempts to qualify for their first ever European Championships, and she has brought in San Diego native Kyra Carusa, who qualifies for Ireland through her maternal grandparents.

English-born forward Nicole Douglas trained with the squad this week but her eligibility has not yet been finalised.

Pauw admitted that she did not know much about her new arrival and is unlikely to start Carusa in the match with Greece, however, there is always the chance that she could take a chance and use her as an impact sub should Ireland require a late goal.

"She is a strong attacking player. She is not the most creative player but very determined and very direct to the goal."

Looking ahead to the game, despite the confidence, Pauw still believes that Greece will come for a contest, and the manager feels that her side will need to be roared on by the passionate home support to get the result, which would take her side to double digits at the half-way stage of the campaign.

"We need the crowd to help us because it will not be an easy game at all.

"The Greeks keep on going until the last second. We are confident but we know that it will be very hard."