Ole Gunnar Solskjaer is wary of the threat Wayne Rooney poses to Manchester United's FA Cup hopes as the Derby forward looks to prove there is "still fight in an old dog".

The Old Trafford giants, on an eight-match unbeaten run in all competitions, head to Pride Park on Thursday night for a fifth-round tie that will pit them against a familiar face.

Rooney scored a club-record 253 goals across 559 appearances during a trophy-laden time at United between 2004 and 2017, when he returned to boyhood club Everton before a spell with Major League Soccer outfit DC United.

The 34-year-old returned to home soil to join Derby as player-coach at the end of last year and is now preparing to line up against his former club.

"He gave absolutely everything for this club and we all appreciate that," Solskjaer said.

"But any goal he scores against us will be chalked off his goal tally! He doesn't want to score too many of them.

"He's a threat - in and around the box, set plays - and of course this game Wayne will show what he can do and he wants to prove that there's still fight in an old dog.

"We've got to be on our toes, don't give him any space in and around the box or in midfield.

"At the latter end when he played in midfielder, you can see he's got Scholesy-like passing range."

Solskjaer praised former team-mate Rooney's personality as well as his on-field performance, revealing that he was the favourite player of his son Noah.

But it feels like England's all-time top scorer is underappreciated in some quarters, albeit not by the Old Trafford faithful. 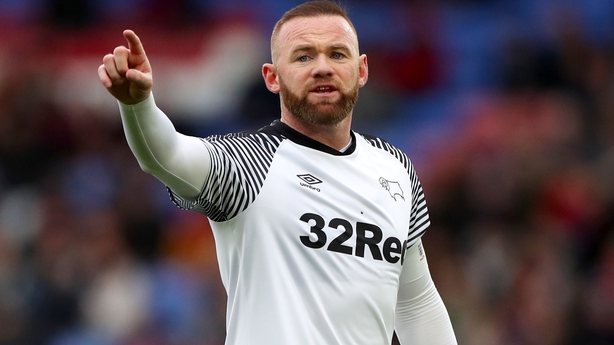 "He's been a fantastic player for Man United and he played here for so long, he's the club's top scorer, he's won so many trophies," Solskjaer said.

"For me, I don't think the fans underrated him. I think everyone really, really appreciates what he did for us.

"He will get a good reception from our away fans in that game definitely."

United are set to be without Daniel James again due to a knock, while Solskjaer says Aaron Wan-Bissaka is a doubt for the Derby match and will undergo a test on Wednesday.

Marcus Rashford remains out with a back injury and Paul Pogba will miss this match and the weekend clash with rivals Manchester City as the midfielder steps up his return from an ankle issue.

"Paul's still working with the physios outside," Solskjaer said.

"He won't be training with the first team until next week, so then let's see how long that will take. But he'll need some time to train, to get his football fitness back."

When Pogba returns - and how long he stays at the club - remains to be seen, but there is a confidence around the club that they are on the right path.

There is plenty of work to do as United are an eye-watering 37 points behind Premier League leaders Liverpool, who saw their hopes of winning a league, cup and Champions League treble dashed by Tuesday's FA Cup loss at Chelsea.

Solskjaer, who played in the 1999 FA Cup final days before sealing that very treble, said: "For me, it was a fantastic final to play in in '99.

"You can never ever underrate the FA Cup and how much it means for the fans and the players and the club.

"For us, it was a big step towards (the treble), especially the semi-final against Arsenal. That was maybe the turning point. The treble was a fantastic achievement.

"We hope we're going to do it again, but it's a difficult task and it's more or less impossible because there are so many good teams around and it has changed domestically.

"There's better teams around here now. It was either us or Arsenal in '99, so that was it and now there's more of us."