Rianna Jarrett says she's feeling better than ever as she gears up for the Republic of Ireland's crunch Euro 2021 qualifier against Greece in Tallaght on Thursday.

The striker left her hometown club Wexford Youths to sign for Women's Super League outfit Brighton and Hove Albion on a six-month contract back in January.

She had to bide her time before making her Seagulls debut, but when it came it was worth the wait.

Jarrett was finally given a start in last week's Women's FA Cup clash against Crystal Palace and she duly bagged a brace in a 3-0 win. That was her first game since last November's FAI Women's Cup final triumph with Wexford Youths over Cork City.

She showed little sign of rustiness in a clinical performance - and now the 25-year-old has her sights set on sinking the Greeks.

"I was delighted to get the move in January," Jarrett told RTÉ Sport's Tony O'Donoghue.

"I knew I'd have to bide my time before I got a bit of game time but thankfully that came last Tuesday in the FA Cup. To score in the first 20 minuets as well, I couldn't have asked for better.

"Then we went 2-0 up 30 seconds after the restart when I managed to get my head on a cross. I was delighted with that. I think I showed glimpses of what I can do.

"There is that big step up to the Women's Super League from the Women's National League. The hard work has still to continue. I just need to keep my head down, keep working hard and get some game time in the league over the next couple of weeks.

"I'm feeling good. Training in a full-time environment has helped. I'm enjoying that aspect of it as well. I hadn't played since the FAI Cup final in November. The body felt good and reacted well after it." 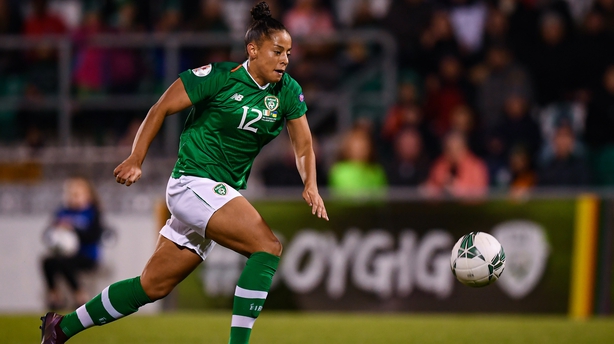 It was a bitter pill to swallow, though Jarrett insisted the team has worked hard to learn from costly mistakes made.

"We went 1-0 up in that game and conceded, they scored very late on, but to be honest there was a lot we need to look back on and improve on.

"There were a lot of situations where we didn't help ourselves. The game became a little bit of a battle, and we were getting deeper and deeper as the second half went on. We've had a look at that. It's nice to be back on home soil, on our own pitch in front of a familiar crowd.

"They'll be confident after taking a point off us the last day but we have our own game plan. We know what we need to do. You can see by the vibe around the camp everyone is in good form and everyone is looking forward to Thursday."

Follow the Republic of Ireland v Greece (kick-off 7.15pm) on Thursday via our live blog on RTE.ie/Sport and the News Now app or watch live on RTÉ2 and RTÉ Player from 7pm