Jose Mourinho has said some of the Tottenham fans who are demanding that Troy Parrott gets game time do not even know what looks like.

Mourinho has come under big pressure to play the 18-year-old as Spurs are shorn of any other recognised strikers, with Harry Kane and Son Heung-min out injured.

Parrott is a prolific scorer at youth level and has already played for the Republic of Ireland, but has yet to play a full 90 minutes of senior football.

Mourinho is regularly repeating his message that Parrott is not ready to come in and replace Kane or Son, but that does not stop Spurs fans placing expectation at the teenager's door.

"This is a world where lots of people, they don't even know if Troy has long hair or short hair," Mourinho said.

"There was a guy behind me on the bench the other day: Play Troy, play Troy. I don't think he knows Troy." 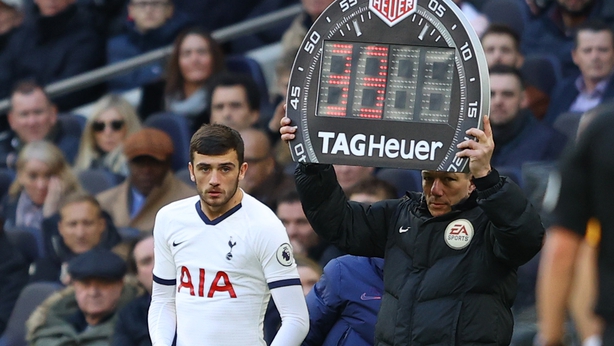 Mourinho did play Parrott that day, but only for three minutes in the 3-2 defeat to Wolves.

He was sent to play for the under-23s on Monday with a clear message to prove why he is ahead of his fellow team-mates, something he did with a goal in his 45-minute outing.

It is a message that Mourinho is finding himself repeating, having encountered a similar issue with Scott McTominay at Manchester United.

Mourinho sees similarities in the pair's attitude and hopes the end result will be the same.

"I was so happy with the way he performed and I'm not speaking about the goal that he scored," Mourinho said of Parrott's outing in the under-23s.

"I told him before the game, every time you play with the kids of your age, you have to show your colleagues why you are the privileged one.

"Why you are training in the first-team every day and some of them are not - they are still in the group age. Because it was something that he was not doing.

"I have no problem to say because I know that he will confirm - I had exactly the same words with Scott McTominay.

"At the moment, he was not loved in his group age. Because he was not with the right frame of mind.

"He was the best in everything, the best in attitude, the best in character. This is the way you work with kids and if, in these generations, kids, they have things too easy in life, I think it's part of the education to also see the other side.

"So I think Troy will come even stronger and stronger when everything happens step by step. And not immediately.

"Because he is not ready for it immediately. So it is a process.

"So tomorrow if he plays and he scores the winning goal, and he is the back page of your newspapers, nothing changes. The next week he goes again to play for the under-23s. Everything is a process."