FC Copenhagen forward Michael Santos has been charged over an alleged assault on a police officer during the club's Europa League match with Celtic.

Santos, who scored in the 3-1 victory at Celtic Park, and a steward employed by Copenhagen were spoken to by Police Scotland and charged, according to the Danish club.

Footage from the televised game appeared to show an incident involving another Copenhagen goalscorer, Pep Biel, in which the club say he was grabbed by "an official".

Copenhagen said a steward "tried to prevent a clash" before being taken away by officers, with Santos also speaking to police. Both have since been charged over the incident.

A statement on the Danish club's website said: "After Pep Biel's 2-1-goal at Celtic Park there was turmoil in front of the FCK fan section after an official grabbed Pep Biel during the celebration.

"One of our stewards tried to prevent a clash and was led away and talked with Scottish police.

"Michael Santos also talked with the police, who subsequently have charged them both.

"They travelled home with the team, and we are now waiting to see if the Scottish police will pursue the case. We will co-operate if they want more information from the club.

"Those involved are not going to comment on the episode." 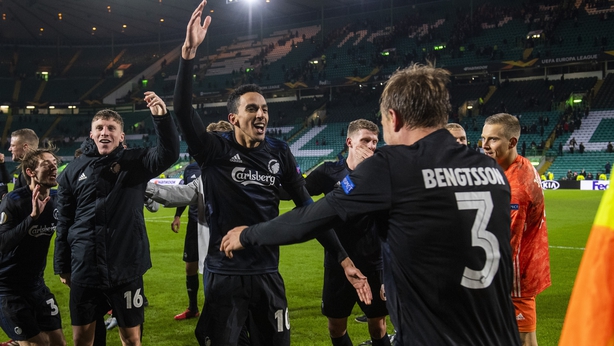 Eight fans were also arrested at the game in Glasgow on Thursday night. Six of those were home fans while two were travelling supporters.

A Police Scotland spokeswoman told the PA news agency: "Eight arrests were made at the Europa League fixture between Celtic and Copenhagen last night.

"Six home and two away supporters were detained over minor disorder offences.

"In connection with an assault, we can confirm two males aged 42 and 26 were charged and a report will be made to the procurator fiscal."