Anthony Martial saved United's blushes on a wet and windy night in Belgium last week, with his away goal securing a 1-1 draw that gave his side the upper hand heading into the second leg of the round-of-32 fixture.

A muscle injury sustained on the eve of the game meant the France forward missed the return fixture, but Ighalo proved an able deputy by scoring in-between Fernandes and Scott McTominay goals on a night when Fred's brace wrapped up a comprehensive 5-0 win.

United progressed to the last 16 with a 6-1 aggregate victory - an outcome Club Brugge head coach Philippe Clement feared ahead of the match, admitting his absentee-hit side needed "something bigger than a miracle" to go through. 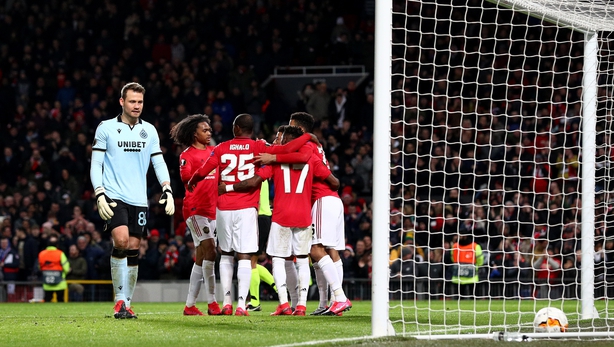 The incline on that uphill battle got even steeper midway through the first half when defender Simon Deli received his marching orders for inexplicably denying Daniel James' strike with a one-handed save.

Fernandes coolly converted the resulting penalty, after a four-and-a-half-minute wait caused by a surprising VAR review, with deadline-day signing Ighalo quickly compounding matters when tapping in to open his account.

Fernandes was involved in that move, just as the midfielder was when collecting possession before McTominay struck on his first start since injuring his knee on St Stephen's Day.

United took their foot off the gas in the second half and the Portuguese was replaced by Jesse Lingard, who laid off for Fred to net his first goal of the season before the Brazil midfielder completed the rout with another in stoppage time.